4to. 3 in 4 vols. With 2 folding maps and one folding panorama. Numerous illustrations and plans. Original wrappers.

First edition of this standard work on the region: the first scientific account of the Nabataean antiquities, including the ruins of Petra. The Bohemian scholar Alois Musil (1868-1944) was fluent in 35 Arabic dialects. In 1898 he had rediscovered the lost desert castle of Qusayr Amra (built ca. 715 A.D.) in the Jordanian desert north of Amman. During WWI he was sent to the Middle East to thwart British operations against the Ottoman Empire, thus becoming the opponent of T. E. Lawrence. In 1827 he helped establish the Oriental Institute of the Academy of Sciences in Prague.

With contemp. ownership "Dr. Zweig" on wrapper covers (in Hebrew and German). Some pages uncut; professional repairs to edges. Rare with all 4 volumes; no complete copy recorded at auction during the past decades. 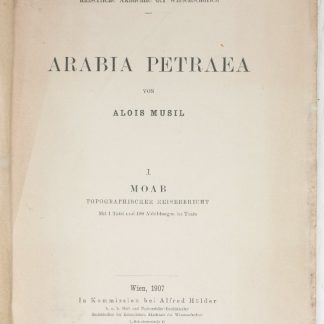