Albuquerque in the Arabian Gulf

Danvers, Frederick Charles. The Portuguese in India. Being a history of the rise and decline of their eastern empire.

Modern, encompassing history of Portuguese India, including an extensive account of the campaigns and operations of Afonso de Albuquerque in the Arabian Gulf, which he entered as the first European. "In 1506 Albuquerque was despatched from Lisbon on an expedition, intended to consolidate Portuguese supremacy in the Indian Ocean. His instructions were to monopolize trade with East India for portugal, and to exclude both Venetians and Saracens from Indian waters [...] Attacks were made on the Arab ports at Malindi, Hoja, Lamu and Brava, before continuing to Socotra [...] Sailing from Socotra with six ships, Albuquerque coasted the Arabian peninsula, sacked Muscat and Sohar, and then launched an attack on Hormuz during the months of September and October 1507. In spite of the overwhelming forces assembled against him by the island's twelve-year-old ruler, Albuquerque mounted a successful siege, with the result that the ruler become a vassal of the Portuguese crown" (Howgego I, 19ff.).

Signed "A. J. Whittle" on half-titles (but struck out in vol. 1). Slight rubbing to extremeties, fine altogether. 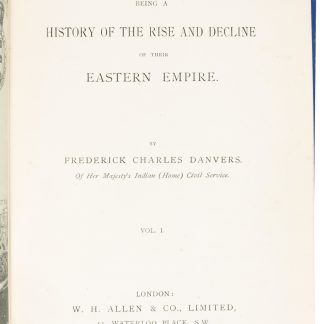 You're viewing: Danvers, Frederick Charles. The Portuguese in India. Being a history of the rise and decline of their …London, 1894. € 2,500.00
Add to cart