Pretty Lüneburg-printed Luther Bible in small pocket format, bound as a "dos-à-dos-à-dos binding", a superlative triplet version of the dos-à-dos binding. The latter is described as "a binding structure in which two separate books are bound together such that the fore edge of one is adjacent to the spine of the other, with a shared lower board between them serving as the back cover of both". Von Arnim states that "this gimmick first seems to have appeared in the 1560s [...] Gruel noted that these curious bindings almost exclusively contain Protestant functional writings. It would seem that sober Protestantism here yielded to a luxurious whim, as it were, a substitute for the Catholics' bibliophile Books of Hours. Dos-à-dos bindings were particularly popular in England, especially for the small-format editions of the New Testament and Psalms so common there [...] Of nine dos-à-dos bindings in the British Museum, six are embroidered" (Bibl. Otto Schäfer, no. 79). "These twin bindings, or dos-à-dos bindings, were used frequently for religious books of the 17th and 18th century, but very few have survived" (Sonntag, Boerner Cat. 21, no. 63: an embroidered English dos-à-dos binding). Bound between the first and second parts (Genesis through Song of Solomon; Prophets) is the third part (New Testament), with shared inner boards. A few old ms. notes; first part wants flyleaves. Some professional repairs to the binding's extremeties. 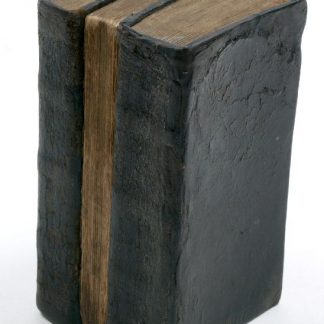