Perfectly complete copy of this superb collection of travels, composed of the first edition of the 3rd part and the second edition of the 1st and 2nd part. The second edition, widely enlarged, of the 1st part, is the first and only one to present the 3 double-page maps representing Africa and India that had not been printed in the first edition of 1550, and which would not be reprinted in the 3rd edition of 1563 since the wood plates of these 3 maps had been destroyed in the fire that ravaged Giunti's workshop in 1557.

"This work, which served as a model to Hakluyt, was the first systematical collection of voyages that had so far appeared [...] It [...] is carefully and intelligently done" (Cox). "All authors are unanimous of their praise of Ramusio's choice of published narratives. Locke, the English philosopher, states that it is 'the most perfect work of that nature in any language'. Harrisse writes, 'The publication of Ramusio's "Raccolta" may be said to open an era in the literary history of Voyage and Navigation. Instead of accounts carelessly copied and translated from previous collections, perpetuating errors and anachronisms, we find in this valuable work original narratives which betray the hand of a scholar of great critical acumen'" (Borba de M.). The first volume, mainly dedicated to Africa and South Asia, happily includes several travel reports of the utmost importance for the exploration of the Arabian Peninsula and the Gulf region. Lodovico Varthema's travel report, famous for detailing the first recorded visit of a Westerner to Mecca, indeed the first western encounter with the Arab world, contains accounts of the holy cities of as well as of the port of Jeddah, information on Bedouin life and costume, etc. (ff. 162-166).

The account of Vasco da Gama's voyage to India is comparable in importance only to Columbus’s in the west, as it “opened the way for the maritime invasion of the East by Europe” (PMM 42). Da Gama’s pioneering sea voyage ranks amongst the greatest historic events of the second millennium and as “one of the defining moments in the history of exploration” (BBC History, online). It is also considered the turning point in the political history of the Arabian Gulf region, followed as it was by a prolonged period of east-west commerce, conquest and conflict. Critically, the excerpt here published includes details on "una isola [i. e., Julfar] verso il colfo Persico dove altro non si fa che pescar perle" (I, f. 132).

Duarte Barbosa's report includes accounts of Mecca and Medina (f. 323), the ports of Jeddah (ibid.) and Aden (f. 324), the Arab kingdom of Hormuz (ff. 324-327), Julfar and the islands in the Arabian Gulf (f. 325, with reference to pearl-diving), etc. Also, we find the very early and highly influential, albeit imprecise data on the Kuwait region: place names such as Lorom, Gostaque, Bacido, Conga, Menahaon (p. 325) etc. which Slot discusses at some length: "Much of the toponymic information in the Kuwait region on the maps from the Gastaldi group is based on an erroneous interpretation of Duarte Barbosa's text. From this text come the strange names of places in the area of Kuwait like Costaqui (Kuhistaq) which should in fact be placed on the other side of the Gulf [...] Loron [...] might be an error for the Karun River which is on the Persian side just east of the Shatt al-Arab. Then follows inside the inlet of the Gulf of Kuwait the name Manahon. Then follows around this 'Gulf of Kuwait' three names which are cased by erroneous plotting [...]: Congo (Bandar Kong), Costaqui (Kuhistaq) and Bacido (Basaidu) with the offshore island of Queximi (Qism). These are names taken from [...] Duarte Barbosa's book and erroneously plotted on this coast" (Origins of Kuwait, p. 15).

The volume also includes a set of three woodcut maps by Gastaldi: the first showing Africa, the second showing the Indian subcontinent, the Strait of Hormuz, the Eastern half of the Gulf, and the Indian Ocean, while the third shows Southeast Asia and the East Indies. These were a great advance on earlier maps, including even Gastaldi's own, taking into account new information provided by Portuguese explorers. Many of the topographic names in the Gulf region derive from the forms used by these navigators and can be identified, sometimes tentatively, from their place on the first two of these maps and from the early accounts of the voyages: "Cor. Dulfar" (Dhofar), the island "Macira" (Masirah), "C. Resalgate" (Ras al Had?), "Galatia" (the ancient site Qalhat), "Mazcate" (Muscat), the island "Quexumo" (Qeshm), "Ormus" (Hormuz), and there is even an unlabelled city close to the present-day Abu Dhabi.

Occasional handwritten ink notes. Waterstain on the lower part of vol. 2, ff. 31-35; some browned leaves; otherwise fine, a washed copy. Provenance: Professor Eva G. R. Taylor (1879-1966), historian of science and the first woman to hold an academic chair of geography in the UK, presented to Birkbeck College, University of London (bookplate) and sold through Sotheby's in 1990. 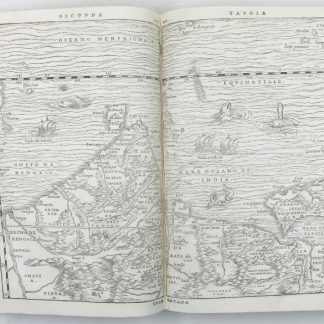