The first printed eyewitness account of any place in today's UAE: an early German edition with 44 illustrations

4to. 220 unnumbered pp. Title-page and title woodcut printed in red and black; full-page woodcut on reverse of title-page and 44 woodcuts in the text by Jörg Breu the elder. Bound with eight contemporary pamphlets. Contemporary blindstamped leather over wooden boards. All edges red. Remains of two clasps.

Sixth or seventh, still early German edition of Ludovico di Varthema's famous travels to Arabia, Persia, and India: the highly important and adventurous narrative containing the first printed eyewitness account of any place in today's United Arab Emirates. On his return journey from Mecca (which he was the first Westerner to describe), Varthema visited Ras al-Khaimah ("Giulfar") and portrayed the city as "most excellent and abounding in everything", with "a good seaport", and whose inhabitants are "all Muslims". While Montalboddo's famous anthology of discoveries, printed in 1507, contained the first printed reference to the Arabian Gulf region, it was Varthema's work, published only three years later, that offered the first actual report from the region by a Western traveller who had visited the coast. All early editions of Varthema’s account are exceedingly rare (even the 2013 Hajj exhibition at the MIA, Doha, only featured the 1655 reprint; cf. below).

Bound at the end of the volume are eight rare contemporary pamphlets, including two concerned with the Ottoman wars, two others so rare that they are bibliographically unrecorded (a full list with references is available upon request). Binding is mildly rubbed and bumped; interior shows slight browning and fingerstaining with occasional edge damage. Pastedown has ownership and bookplate of the Bildhausen Cistercians, dissolved in 1803. 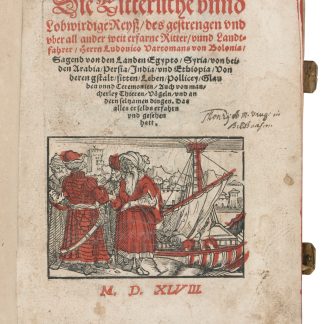