An early merchants' guide to the measurements of the Mediterranean and Near East, this pocketbook for sixteenth-century Italian traders is one of the foremost sources for the study of the metrologies of Venice and her trading partners in the early sixteenth century. It enabled conversion between Venetian currency, weights and measures and units of other Italian city-states, European neighbours and more exotic locations in the Levant, North Africa, the Near and Middle East, including Constantinople, Aleppo, Tripoli, Damascus, Cyprus, Corfu, Rhodes, and Crete. Pasi's manual is invaluable as a record of the panoply of commodities traded in the Mediterranean at the beginning of the sixteenth century, including pearls, silks, wool, saffron, chestnuts, figs, galangal, vegetable oils, gold and silver. On fols. 3, 11, and 12, Pasi recorded the tariffs on pearls in Damascus, Aleppo, Cairo, Alexandria, Constantinople and Venice. It is very likely that the famous merchant Balbi carried a copy of this classic with him on his travels. First printed in Venice in 1503, and again in 1521, this 1540 edition appears to be the third and was followed by another in 1557.

- Some brownstaining to preliminary matter; a few contemporary ink marginalia slightly trimmed in the course of the 17th-century rebinding. On the whole an excellent clean copy. Very rare: the only copy of any edition to surface at auction within the last thirty years appears to be the Honeyman copy of the 1503 edition. 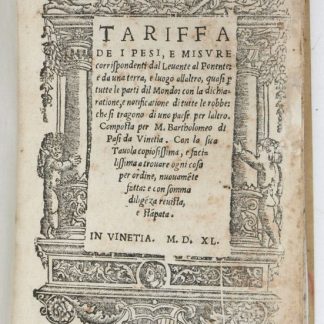