A primary reference work on the history of travel and exploration

A primary reference work on the history of travel and exploration, including the principal accounts of the great voyages to the Middle East. This is a complete run of the first series and a large part of the second series (with its first part complete), dating from 1847 to 1956, of the publications of the Hakluyt Society. Early volumes of interest to the student of the exploration of the Muslim world, but also of the world's exploration by Muslims, include the travels of Abd-er-Razzak (India in the 15th Century, vol. 22, 1857), the travels of Ludovico de Varthema in Egypt, Syria, Arabia Deserta and Arabia Felix (vol. 32, 1863), and the History of the Imâms and Seyyids of 'Omân by Salîl-ibn-Razîk (vol. 44, 1871, providing the first indigenous account of the history of Oman in English), as well as the travels to Tana and Persia, by Josafa Barbaro and Ambrogio Contarini (with a Narrative of Italian Travels in Persia in the 15th and 16th Centuries, vols. 49a and 49b, 1873). The "Commentarios" of Afonso de Albuquerque, the first European to enter the Arabian Gulf, are present in a careful edition from 1875ff. (vols. 53, 55, 62, and 69), while the early 15th century narrative of the "Bondage and Travels of Johann Schiltberger, a Native of Bavaria, in Europe, Asia, and Africa" is the first account by a western Christian to state the true burial place of Muhammad, at Medina. Volumes 72 and 73 (1886) contain accounts of early voyages and travels to Persia, while vols. 84 and 85 (1892) offer the famous "Travels of Pietro della Valle in India". Volume 87 (1893) is a collection of "Early Voyages and Travels in the Levant"; vols. 92 and 93 (1896) constitute the famous description of Africa by Al-Hassan Ibn-Mohammed Al-Wezaz Al-Fasi, also known as Leo Africanus. In the second series, vol. 9 (1901) gives the "Travels of Pedro Teixeira, with his 'Kings of Harmuz', and Extracts from his 'Kings of Persia'"; vol. 16 (1905) is the journal of John Jourdain, 1608-17, describing his experiences in Arabia; John Fryer's "New Account of East India and Persia" (covering his travels made in 1672-81) is given in vols. 19, 20 and 39 (1909-15). Ibn Batuta's great travels are contained in vol. 41 (1916) and 110 (1956), while the itinerary of Duarte Barbosa, a Portuguese official in India from 1500 to 1516 (vols. 44 & 49, 1918-21), includes accounts of Mecca and Medina, the ports of Jeddah and Aden, the Arab kingdom of Hormuz, and the islands in the Arabian Gulf (with reference to pearl-diving). The 1496 pilgrimage of Arnold von Harff to Syria, Egypt, Arabia, Palestine, and Turkey is given in vol. 94 (1946), while the following volume recounts the travels of the Abbé Carré in Syria, Iraq and the Gulf region, 1672 to 1674 (1947).

Founded in London in 1846, the aim of the still-thriving Hakluyt Society is to "advance knowledge and education by the publication of scholarly editions of primary records of voyages, travels and other geographical material". For 170 years the society has published an annual or bi-annual volume of original accounts of such voyages. Their historically significant texts and translations, often appearing in print for the first time, are fully annotated, well illustrated with maps and plates, and conform to the highest standards of scholarship. As such they often represent the last word on the material they embrace, and are widely valued by historians and geographers throughout the world. Full complete sets of the publication are only held in institutional libraries, and this is the largest run to have appeared in the trade in over 40 years. 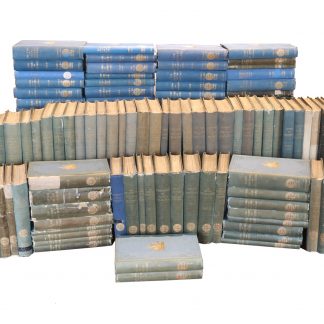