The metamorphosis of 67 butterflies and moths, in 32 plates

Folio. With 32 (of 33) mostly numbered plates showing the metamorphosis of butterflies, moths and other flying insects. Mounted in passe partouts and kept in a half cloth clamshell box.

32 (of 33) plates depicting the metamorphosis of 67 (of 70) sorts of butterflies, moths and other flying insects in their natural surroundings, the specimens collected, drawn, and here in all but the first ten plates also etched and engraved, by Jacob l'Admiral (1700-70), first published in 1740 with only 25 plates and in 1774 with 33 plates. The first 10 plates in the present set are 18th-century copies that we have not found recorded in the literature. They were apparently copied from the first (1740) edition, for plate VII includes l'Admiral's name as in that edition, removed before the second (1774) edition. Most plates show the species as egg, larva, pupa and adult, both male and female, placed on the plants they frequent in their natural habitat. Scientifically they were a great advance over all that went before, including the pioneering work of Maria Sibylla Merian. L'Admiral began studying butterflies at the age of ten. He collected the specimens during 30 years of travel and intended the first edition with 25 plates to be one of 4 parts for a total of 100 plates. He finished only 8 additional plates before his death in 1770 and had not yet published them or his descriptions. After l'Admiral's death the bookseller Sluyter bought all the copperplates at auction and produced the second edition, including the 8 additional plates. Plate XII depicts a tulip.

Plate 30, though printed from the original copper plate, has one butterfly additional to those in the 1774 edition. Plate II is unnumbered. Although the first 10 plates are copies, all 32 may have been printed on the same mix of paper stocks. There are at least three different paper stocks, but in many cases the watermarks are mostly obscured by the image: Strasbourg arms above 4 & WR, Strasbourg arms with nothing below it, and Strasbourg bend, and countermarks "IV" and "I Villedary". At least some of the Strasbourg arms have a crown similar to Heawood 1819 and 1828, possibly the watermark of the 1774 edition (with countermark IV). Watermarks in all three general styles were already in use before 1740, so a close dating would require a detailed study.

An unscrupulous dealer changed the plate number XXXIII to XXVIII to suggest a complete set of 32 rather than a set of 33 with one plate lacking. The margins have been trimmed close to the plate edge and the paper stock with the "I Villedary" countermark is slightly browned, but the plates are still in good condition. 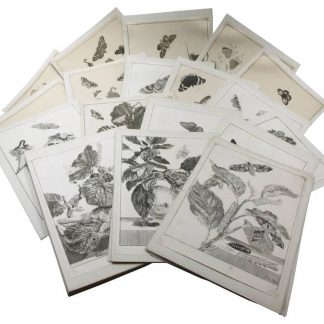