14th-century tales of travels in Turkey, the Middle East, Near East, India and the East Indies illustrated with about 60 woodblocks

Mandeville, John. The voyages & travels of Sir John Mandevile, Knight, … to the Holy Land, and to Hierusalem: as also to the lands of the Great Caan, and of Prestor John: to Inde, and divers other countries.

4to (19.5 x 15.5 cm). (4), "139" [= 135], (5) pp. With a woodcut ship on the title-page (with a griffin on the sail) and about 60 woodcut illustrations in the text (mostly about 55 x 80 mm) plus about 10 repeats, each with a thick-thin border. Set in textura types with incidental roman and italic. Gold-tooled, red goatskin morocco by Robert Riviere in London (ca. 1875/80), with 5 (false?) bands on the spine, each board with a double frame of double and triple fillets and 2 different sets of 4 corner pieces, author and title in gold in 2nd and 3rd of 6 spine compartments, the others with gold-tooled decorations and the date and place of publication at the foot, gold-tooled turn-ins, gold fillets on board edges, straight-combed endpapers, gilt edges, stamped on the back of the free marbled endleaf in sans-serif capitals: "Bound by Riviere".

A rare 17th-century English edition, with about 60 different woodcut illustrations, of a classic and partly fictional 14th-century account of travels presented as voyages of Sir John Mandeville through Turkey, Egypt, Ethiopia, Syria, Persia, Arabia, India and the East Indies. According to the story he set off on his travels in 1322 from Saint Albans in England, returned in 1343, wrote the present account in 1364 and died in 1371. It was originally written in French and is thought to have been compiled from various sources by Jehan d'Outremeuse (1338-1400) of Liege. A 1371 manuscript survives and it first appeared in print under the title Itinerarius in Dutch (ca. 1477), French (1480), German (1480) and other languages, and in English in Richard Pynson's edition of ca. 1497/98. It includes many well-known stories and illustrations of monstrous people and animals in exotic lands: a man with only one enormous foot that he can use as a parasol, a dog-headed man, a man with his face in his chest, a girl who turns into a dragon, griffins, nine-metre giants, ants that gather gold, diamonds that mate and give birth to baby diamonds and much more that spoke to the imagination (though the ox-headed man is presented as an idol that was worshipped, rather than a fantastic beast). The book also includes genuine descriptions of the regions covered and gave many Europeans their first notions of the Near East, Middle East, India and East Indies. It shows carrier pigeons, an elephant and other recognizable or plausible scenes. It also incorporates and illustrates some biblical stories. The part on Arabia includes an account of the birth of Mohammed. Most of the present woodcuts are loosely and indirectly based on those in the 1481 Augsburg edition, partly in mirror image. The book went through dozens of editions in English and other languages. It reached more or less the present form with the 1650 London edition, which may have used the same woodblocks (we have not had an opportunity to compare them). The imprint of the present edition names four London publishers, and one of them (Conyers) also advertises his edition of William Lithgow's Nineteen years travels (1692) at the foot of the last page. The book was registered for these four publishers in the term catalogue for Trinity 1696, issued in June. The printing was probably shared between two different anonymous printers: exactly half way through the book, between quires I and K, the running heads, the textura type used for the main text and the roman drop capitals opening the chapters change. The 1684 edition by four London publishers (none named in the present edition) not only uses the same woodblocks but is also typographically almost identical to the first half of the present edition and no doubt came from the same printer. The drop capitals differ, but those in the present edition have not been recorded before 1688. Samuel Roycroft and James Orme both used them, and Roycroft used at least several of the other types in the first half. The book is printed on coarse laid paper with no watermark. Halliwell, in his 1869 edition of Mandeville, noted the present edition for its woodcuts and reproduced at least many of them from the Grenville copy now at the British Library. Only 5 other copies are known, all in U.S. libraries. Robert Riviere (1808-82) established his famous bindery in Bath and moved it to London in 1840, gaining a reputation as one of England's best binders for the quality of his materials and workmanship. He signed his bindings "Bound by Riviere" from 1860 to 1880 (thereafter Riviere & son).

With an early owner's inscription faded on the title-page and 2 armorial bookplates on the paste-down: Sir Edward Sullivan (1822-85), Lord Chancellor of Ireland, and Allan Heywood Bright (1862-1941) in Liverpool, a member of Parliament, along with a loosely inserted signed autograph letter (ca. 1900) from Bright's brother Hugh Bright (1867-1935) in Leeds, giving him the book and noting that he bought it at Young's "some years ago". With 8 leaves with their margins extended at the fore-edge and foot ( N2-O4, Q1, probably sophisticated from another copy of the same edition), sometimes shaving a catchword or quire signature, the title-page and last page somewhat worn and dirty, but further in good condition, with a few minor marginal chips and tears restored or repaired and 3 leaves with minor water stains in one corner. The spine is slightly faded but the binding is still very good. A rare edition of Mandeville's voyages, illustrated with about 60 woodblocks cut ca. 1650. 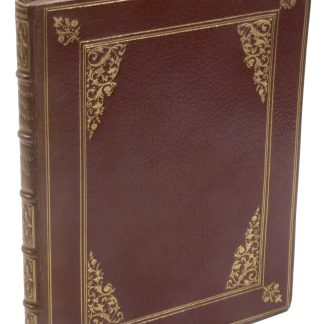