4to (20.5 x 15.5 cm). [20], 211, [1] pp. With the title in red and black in an ornamental, architectural woodcut frame with a palm tree at the head, and woodcut palm tree device above the colophon (both acquired from Erpenius), a decorated woodcut initial, a woodcut factotum and factotums and decorative bands built up from cast fleurons. Set in serto Syriac, meruba Hebrew, Greek and roman types, with incidental estrangela Syriac and italic. Contemporary or near contemporary vellum, sewn on 4 velum tapes laced through the joints, with a hollow back, red edges.

The first edition of any early text of the Book of Revelations in the ancient Syriac language, a book that had been lacking in the manuscripts followed by the earlier Syriac New Testaments. It is also the first book the Elzeviers printed with Syriac or any other "oriental" type, their earlier forays into printing with non-Latin types having been limited to Greek and Hebrew. The main text is set in two columns, with the Syriac text set in Syriac type on the outside and the Syriac text set in Hebrew type on the inside, an aid to scholars less familiar with the Syriac script. Two columns in smaller type at the foot provide the original Greek text and a literal Latin translation of the Syriac. The whole is well printed and laid out, showing why the Elzeviers were quickly gaining a reputation as the leading scholarly printers and publishers. Thomas Erpenius made Leiden University the leading centre for the study of oriental languages when appointed professor of oriental languages in 1613. He set up his own printing office, acquiring or commissioning types for Arabic, Syriac, Samaritan and Ethiopic, and inaugurating it with his edition of Lockman's fables in Arabic (1615). His death from the plague at age forty cut his work short in 1624. Ludovicus de Dieu (1590-1642), Regent of the Walloon College associated with the University, had studied under Erpenius and his successor in Arabic studies Jacob Golius, but for Syriac he became Erpenius's spiritual successor. The present book was nearly his first publication. Although Syriac New Testaments had been published earlier, no source had been found for the Syriac text of the Book of Revelation, which was lacking in the standard "Peshitta" Bible, a Syriac Old and New Testament whose text was probably established in the 4th century. In his 1599 Polyglot, Elias Hutter therefore filled the gap with his own new translation, but De Dieu published the present text based on a manuscript from the library of the great orientalist Joseph Scaliger, apparently a copy made in Rome ca. 1580 of an ancient manuscript of the Syriac text established by the Persian Philoxenus, Bishop of Mabbug, in Mesopotamia in 508 and corrected by the Palestinian monk Thomas of Harkel near Alexandria in 616. For that reason, Darlow & Moule, Smitskamp and others call the present book the "editio princeps". Erpenius's widow briefly continued her husband's printing office, completing the Syriac psalter that he had begun, but it was published jointly by the Elzeviers and Johannes Maire, and on 9 October 1625 the Elzeviers bought her printing office and took over most of its materials and workmen. At the same time they began to acquire and commission new printing materials, greatly expanding the printing office they had added to their publishing house in 1617. This made the period 1625 to 1640 the press's golden age. Erpenius had commissioned the woodcut of the present title-page for his Arabic Historia Josephi in 1517 and most of the types and fleurons came from him as well. Plantin commissioned the serto and estrangela Syriac types from Robert Granjon for volume 5 (1571) of his Polyglot Bible (Erpenius added and revised a few characters in the serto) and Daniel Bomberg commissioned the Hebrew type for his press in Venice, where he used it in 1517. The lovely arabesque initial V with a face in the centre, however, belongs to a series cut exclusively for the Elzeviers and used here nearly for the first time. The book also shows them beginning to supplement their 16th-century French types (Garamont romans and Granjon italics) with 17th-century types cut in the Dutch Republic. The New Testament was originally written in Greek, the language of the Christian Church and Christian scholars in the first centuries of the Christian era, and a lingua franca among the diverse groups living in the Middle East at that time. But it relates stories that would have first been told (and in some cases probably also written down) in Aramaic, the vernacular language of Palestine in Jesus's time. It also presents Jesus's words in Greek translation, while he would have spoken them in Aramaic. While no early New Testament survives in Palestinian Aramaic, the Greek was translated into Syriac, probably already in the second century, and surviving manuscripts may date back to the fifth century. Syriac, another dialect of Aramaic, served as the vernacular language of much of the Middle East (it has nothing to do with today's Syria, where the native language is Arabic). The Syriac text therefore provides valuable clues to the Aramaic sources of the New Testament. The Peshitta Bible remains the standard text among some Christian groups. Debates continue as to how much of the "original" Aramaic can be found in the surviving Syriac versions.

The watermark in the endpapers (a simple bend) does not closely match any found in the literature, but the nearest is Heawood 129, used in Amsterdam in 1646. In fine condition, with only an occasional minor spot and at the edge of the last few leaves some tiny (0.2 mm!) worm holes, and with large margins (the leaves are a couple millimetres taller than those noted by Berghman and Rahir). The binding is very slightly rubbed but still very good. A fine copy of an important work of biblical scholarship and a showpiece of the Elzevier's press at the beginning of its golden age. 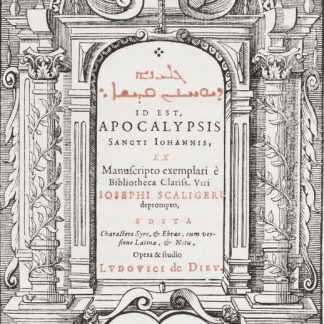