Only edition thus: the 30th and the 48th sura (Ar-Rum and Al-Fath) in the original Arabic and with Latin parallel translation. An early and scholarly specimen of Qur'an translation in the West, with extensive commentary. The Arabic text is rendered in Hebrew letters, as Arabic types were unavailable to the printer. M. F. Beck (1649-1701) had studied history and oriental literature at Jena. In 1677 he settled in Ausgburg as a preacher, but kept his focus on the oriental languages. His linguistic proficiency ultimately earned him a pension from the King of Prussia (cf. ADB II, 218). 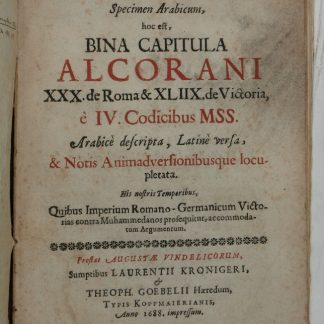