Various sized. A total of 11 ff. comprising design studies, sketches and drafts in various techniques (some on yellow cardboard) and 26 photographs and photographic postcards.

A colourful potpourri of material from the life of the versatile businessman, networker and murderous confidence artist whose plot to commit insurance fraud by booby-trapping the cargo boat Lucona rocked Austrian politics and society in the 1980s.

The sketches and drafts are mainly of eyeglasses which Proksch designed under the pseudonym "Serge Kirchhofer" as art director for the Austrian concern Wilhelm Anger. Another leaf contains a sketch for a Serge Kirchhofer company logo; other pieces, some mounted on cards, are more avant-garde in style. 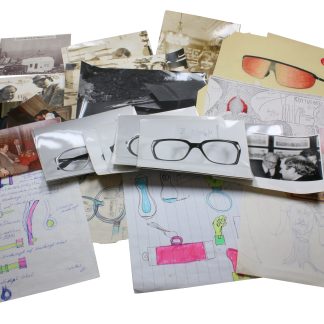