4to. 231, (1) pp. With a few woodcuts in the text. Contemp. full calf, leading edges and spine sumptuously gilt. All edges red.

First edition; very rare. The best known, and most controversial, of Schickard's works: a treatise, with a lengthy introduction, about various Persian ruling dynasties, especially the Sasanians - editing a total of six out of seventeen genealogical charts found on a 45-foot Turkish manuscript scroll. The genealogies aimed to legitimise the Ottoman dynasty by tracing it back to Adam. Schickard (1592-1635) was one of the most learned men of his age, astronomer, professor of Hebrew, mathematician and orientalist. The scroll was brought to Germany by Veit Marchtaler of Ulm, who found it in a mosque during the sack of Fillek (Fülek) in Hungary. Marchtaler wished that the manuscript might not be simply forgotten, consulted in vain with various dragomans (whose versions he did not trust), and finally came across Schickard, who, though he had no Turkish or Persian, knew Arabic and immediately grasped the significance of the scroll. His detailed commentary quotes from various Hebrew and Arabic writings, including several extracts from the Qur'an: sura 21 (p. 60), 38 (p. 53 & 61), 27 (p. 77), 2 (p. 97), and 4 & 5 (p. 97-100). The translation is offered as a gift to the Emperor Ferdinand II until such time as the "autographum ipsum" be lodged in the imperial library. "Schickard was also the designer of Arabic type, which he engraved himself as copper matrices; they were cast by Theodoricus Werlin, and served to illustrate his 'Tarich'" (Smitskamp).

Browned throughout due to paper (as common); trimmed rather closely; final 2 leaves cropped at outer margin with loss of letters. One of three variants, this one without the 20-page appendix (corresponding with the copy in the Bodleian Library, Oxford). Provenance: "Nathan Wright of Englefield", Berkshire (cropped signature at head of title), probably Sir Nathan Wright (1654-1721), lawyer, appointed Lord Keeper in 1700 (cf. ODNB). Later in the collection of the Earls of Macclesfield (North Library at Shirburn Castle; 1860 bookplate, shelfmark 57.B.1). 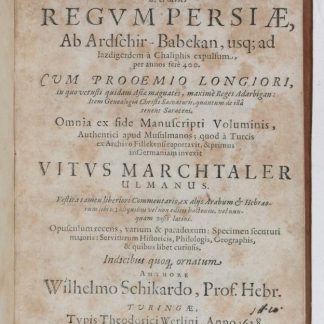