In praise of Abdul Aziz ibn Saud and Wahhabite Arabia

Large 8vo (172 x 240 mm). Scrapbook containing clippings of the newspaper series "Arabische Reise" and other articles on Arabia, along with various illustrations and music. 80 pp., each sheet covered on one side with coloured paper or cloth. Contemporary green library cloth with cover label.

Original clippings of Muhammad Asad's "Arabian Journey", serialized in the "Neue Zürcher Zeitung" in 1927, and including other early newspaper articles by Asad (as well as an essay by Hermann Hesse). The handsome album, apparently assembled by a German or Swiss traveller, Georg Hartmann (whose ownership is inscribed on the pastedown and initialled to the upper cover), is decorated with numerous illustrations cut from contemporary magazines, including several showing camel-mounted bedouins in the desert, a view of Mecca, portraits of Abdul Aziz ibn Saud, the muezzin's call to prayer (arranged in musical notes), and the original business wrapping paper of the Istanbul confectioner Hajji Bekir, whom Hartmann seems to have visited during a 1928 visit to Turkey. On the pastedown, Hartmann has entered a table of contents (with a - possibly slightly later - portrait of Ibn Saud as King).

Muhammad Asad (previously, Leopold Weiss) was a leading traveller and journalist of the 20th century who, in 1926, converted to Islam from Judaism, eventually becoming a diplomat for Pakistan and a best-selling author. His enthusiasm for Wahhabism is evident from these early travel reports from the Arabian Peninsula, where Ibn Saud had just captured Mecca and proclaimed independence in the Hejaz and Nejd, but had not yet united his dominions into the Kingdom of Saudi Arabia. Indeed, Asad's feature on Ibn Saud (also included here) constitutes nothing less than a hagiographic portrait of the ideal ruler, and his incisive writings on Islam aim to familiarize western audiences with what he perceived as the purest and truest form of the religion he had come to embrace, criticizing occidental images of the Muslim faith gleaned from the Ottoman or Persian tradition, which he viewed as corruptions. 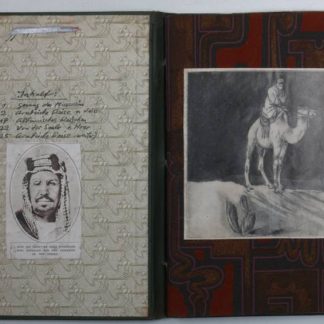