8vo. 9 ff., each measuring c. 120 x 90 mm, carefully mounted under mattes bound in calf the late 19th century (with a description of the contents added at the end). In slipcase.

A collection of devotional miniatures of outstanding quality, with dedications to countess Maria Anna von Callenberg, née countess Thurn-Valsassina (1721-86), first lady-in-waiting to Empress Elizabeth Christina, mother of Maria Theresa and since 1757 married to general Karl Kurt Reinicke, count Callenberg. Five of the nine miniatures are by daughters of Maria Theresa and Emperor Francis I (thus uniting five out of eight princesses that survived infancy), one by a sister of Maria Theresa, another by the youngest sister of Francis I, yet another by the Imperial couble's daughter-in-law, and one by an unidentified writer. A scholarly study of the album, published in 1999 (cf. the sources below), praises the "outstanding graphic quality" of the miniatures, arguing that they must have been created by "professionally trained artists" (cf. Feldhaus, p. 19).

All inscriptions are in French or German; they include: 1) St. Cajetan (S. Cajetanus Thieneus), 3-line inscription signed by Archduchess Maria Amalia, Duchess of Parma (1746-1804), dated 1769.

Provenance: count Carl Callenberg (d. 1820), son of the recipient of these dedications; by descent to her daughter Henriette, the last countess of Callenberg (1764-1835), married in 1787 to count Johann Mittrowsky (1757-99), army surgeon to count Lássy's Infantry Regiment; by descent to the counts Mittrowsky; later in the library of the Austrian collector and Keeper of the Purse, count Franz Folliot de Crenneville-Poutet (1815-88), with his collection stamp on fol. 1; sold through the Vienna art trade to a Rhenish private collection in 1969. 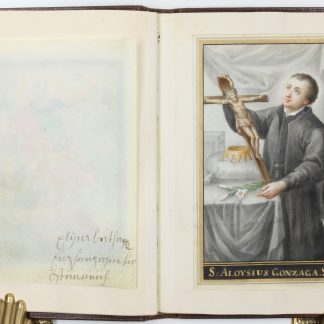