The inside front cover has a ms. note providing the name and address of the seller or manufacturer: "Minato Onochô itchôme - Nanbenya Jûzô". The borders of the specimen sheets are fashioned by re-using an older manuscript.

"Komon" is a Japanese pattern dye style based on especially minutely patterned all-over designs. The intricacy of this style originated in 16th century Japan, when it served to decorate the "kami-shimo", or official Samurai garments, and the clothes of the Shogun's family and of some Daimyos. Occasionally, these would even have privileged ("forbidden") designs (so-called "tomegara") which nobody else could wear. Until well into the 19th century, the production of and trade in such "komon" patterns was subject to a special monitoring system. Since the end of the 18th century the patterns were increasingly used by the urban population. Due to the extreme costliness of their manufacture, such garments were worn mainly on semi-official occasions, especially for private ceremonies and celebrations. The patterns, distinguished by their superior delicacy and minute detail, are produced with the help of wax paste and paper stencils ("kata-gami-zome" or "katazome"; cf. Klein-Bednay, Japanische Musterbücher des 18. und 19. Jhs., in: Von Morris bis Memphis, p. 359).

Compared with five similar pattern books in the Metropolitan Museum of Art, dated "ca. 1680" and "ca. 1700", the present specimen shows a wider range of basic colours, while some designs are slightly less intricate. In all other respects, however - such as the arrangement of the pages, the materials use, the size and the scope - show evident parallels, while the 19th century katazome pattern books or other 19th century textile design collections differ markedly. 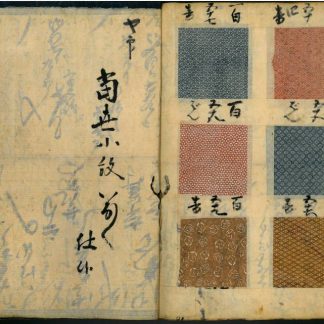