Unique manuscript album in accordion format showing Chinese military formations and drills. "Five Stars and the Crescent" (moon) may refer to a constellation or pattern of stars imitated by a military manoeuvre. The album was produced by court artists of the Imperial Workshop during a time when the Chinese army was facing rapid decline, both in terms of discipline and in terms of competing with Western military techniques. Early during the Taiping Rebellion, Qing forces suffered a series of disastrous defeats culminating in the loss of the regional capital city of Nanjing in 1853. Shortly thereafter, a Taiping expeditionary force penetrated as far north as the suburbs of Tianjin in what was considered the Imperial heartlands. In desperation the Qing court ordered a Chinese mandarin, Zeng Guofan, to organise regional and village militias into a standing army called 'tuanlian' to contain the rebellion. Zeng Guofan's strategy was to rely on local gentries to raise a new type of military organisation from those provinces directly threatened by the Taiping rebels. This force, called the "Xiang Army", was a hybrid of local militia and standing army. In 1860 British and French forces in the Second Opium War captured Beijing and sacked the Summer Palace. The shaken court sought to modernise its military and industrial institutions by buying European technology.

The hand-written brush pen text for each illustration runs vertically to the top right side of each page as follows: "Drum is played on the general's stage and the bugle calls for the standing in line. Each captain of the five posts sees to the straightness of the line. Rules of the running array are followed. No one should talk and all should listen to the order. The line leader leads the mandarin-duck formation and then changes to a straight line".

Some wear to silk and boards, as commensurate with age. Minor repairs. Overall in very good condition. 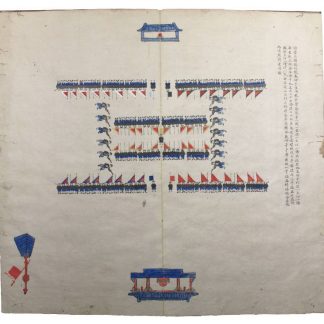