Archaeological account and artefacts from the Turfan area, China, with numerous plates

Reprint of a work on archeology in China, published in the years 1922-1933, written by the German orientalist and archaeologist Albert von Le Coq (1860-1930). From 1902 to 1914, Le Coq led three of the four German expeditions to the Turfan (or Turpan) area, in Xingjian, China. The expeditions were initiated by the German archaeologist Albert Grünwedel. "The principal spoils of these expeditions were literary. Vast numbers of Chinese manuscripts were obtained from every center, both secular and religious. … Besides securing manuscripts, these expeditions examined caves decorated with stucco figures and with frescoes…" (Couling). The text gives a brief history of the expeditions, the different sites they excavated, including grottoes and temples, which are also shown on some of the smaller illustrations, followed by descriptions of the objects shown on the plates. "The civilization thus revealed is a mixture of Persian, Indian, Chinese, Hellenic etc." (Couling). Both Grünwedel and Le Coq went back to Berlin with thousands of artefacts, of which many are shown in the plates. The second volume, titled Die Manichaeischen Miniaturen, deals with fragments of illuminated manuscripts, the other volumes deal mainly with either sculpture, mural paintings or frescoes and their techniques. The fourth expedition ended early due to the outbreak of the First World War, but compared to the earlier expeditions they collected the most artefacts during this short stay.

All volumes in very good condition. 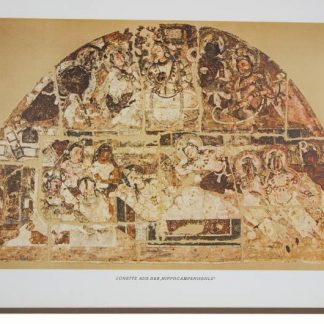