First edition of a travelogue through Asia, written by Carl Gustav Mannerheim (1867-1951), future president of Finland, 1944-1946. In 1906, Mannerheim, then a colonel, was sent on an expedition to Asia. "The object of this expedition was to study conditions in the interior of Northern China, collect statistical materials and perform various tasks of a military nature", says Mannerheim in the preface. Russia wanted to know the state of affairs in China due to the reforms and modernization undertaken by the Qing Dynasty. Besides that, Mannerheim wanted to collect items of scientific interest for the National Museum in Helsinki and to study the little-known peoples living in Northern China. This makes the work, with its numerous illustrations by photographs, an interesting anthropological account as well. The first volume contains Mannerheim's journal with many photographs. The second describes the scientific results the artefacts Mannerheim took with him to Helsinki and, including sculptures, costumes and utensils.

Number 33 out of limited edition of 100 and signed by the author. With owner's inscription of Ewald Henttu on flyleaf, dated 1940. Very good copy; binding slightly rubbed along the extremities. 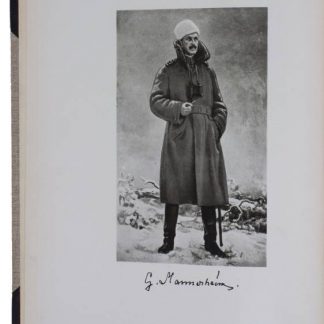