Augmented Dutch edition of Pococke's celebrated description of the Near and Middle East, with 205 engraved plates

First edition of the Dutch translation of Pococke's celebrated monograph on the Near and Middle East, praised by Gibbon as a work of "superior learning and dignity" (Decline and Fall, ch. 11, n. 69). This Dutch edition was augmented with 27 plates, an essay by the minister Rutger Schutte on the travels of the Israelites, and a index to Biblical locations found in the main work.

"Pococke travelled extensively in Europe from 1733 to 1736 and continued on to the Levant, reaching Alexandria in September 1737. He remained three years in the Eastern Mediterranean, visiting Egypt, Palestine, Asia Minor and Greece. His book describes these journeys but not necessarily in chronological order. The plates of antiquities are after drawings by Pococke himself ... Pococke achieved a great reputation with this publication; the work was very popular during his lifetime and was praised by Gibbon" (Blackmer). "The quality and particularly the earliness of his observations and their record in prose, maps, and diagrams make him one of the most important near eastern travellers, ranking with Frederik Ludvig Norden and Carsten Niebuhr, in stimulating an Egyptian revival in European art and architecture, and recording much that has subsequently been lost" (ODNB).

A couple plates in the last volume slightly browned and a few spots on the first few leaves of the first volume, otherwise a very good copy, with the leaves nearly untrimmed. The bindings somewhat rubbed along the extremities (primarily the spines), but otherwise good. 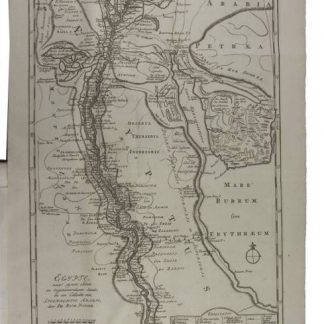