First edition in French of a work on the imperial palaces of Beijing by the Finnish-born Swedish art historian and professor Osvald Sirén (1879-1966). Besides the Italian Renaissance, Sirén was very interested in Chinese art and culture, and wrote various books on the subject, mostly in English. The photographs were all taken by Sirén himself, and he wrote an accompanying 40-page introduction on the so-called "Forbidden City", with two small chapters on the seaside and summer palaces. The heliotypes show mostly palaces, some from several angles, but also monuments, pavilions, statues, interiors and gardens, with short descriptions in both French and English. They give a unique view of the city in the early 20th century, since some of the buildings have vanished or are now settled in completely different surroundings. An English edition appeared simultaneous by the same publisher.

With a bookplate in each volume of W. A. S. Swets (1902-92). Minor foxing throughout, original paper wrappers heavily discoloured. Overall a good copy, wholly untrimmed and with the bolts unopened. 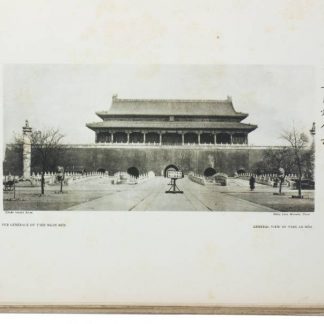