Napoleon's plans for a Suez Canal

The five-plate atlas to accompany the mémoire regarding the possibility of constructing a modern canal from the Mediterranean to the Red Sea via the Isthmus of Suez, which J.-M. Le Père, chief engineer of the Ponts et Chaussées, would submit to Napoleon in 1803. The plates include a hydrographical map of Lower Egypt and the Isthmus, a plan of the port of Suez, a plan and view of the "Fontaine de Moïse", a synoptic chart of the (supposed) various water levels along the Isthmus, and a plan of the city and ports of Alexandria. Even here, in their earliest publication, dated 1802 on the title page, the plates already bear the numbers under which they would be published in 1809 and 1817 within the monumental "Description de l'Égypte", bearing witness to the accuracy with which the editors had planned their famous work. Indeed, the commission to distil into a publication the enormous amount of data accumulated in Egypt by Napoleon's savants had only been established in February 1802, and the table of contents (on the reverse of the title page) specifies that "ces planches font partie du grand Atlas de l'ouvrage de la Commission d'Égypte, état moderne".

Le Père's mémoire itself was not published at all before it formed part of the "Description": a copy of this first publication, removed from part II: État Moderne, volume 1, is included with this set (it would be published independently, with the atlas, in 1815).

During the 1798 campaign in Egypt, Napoleon's officers had discovered remnants of the ancient "Canal of the Pharaohs", a west-east waterway built under Darius I of Persia that linked the Nile and the Red Sea. Napoleon contemplated the construction of a north-south canal to connect the Mediterranean with the Red Sea, and Le Père was commissioned to investigate the possibility of building such a canal. While the plan was abandoned because it wrongly concluded that the sea levels were different and the waterway would require locks, the report was important as a basis for Ferdinand de Lesseps' successful plans for the Suez Canal many decades later. 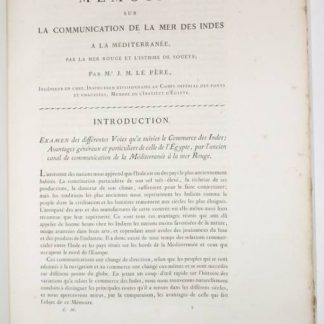