[Palestine - Railroads]. Photograph album of Palestine during and after the First World War.

4to. (25) ff., (7) blank ff. With 100 black and white photographs of various sizes (between ca. 75 x 105 and 90 x 145 mm), 96 of which mounted, 4 loosely inserted. A few captioned in ink on the photograph or on verso. With original hand-drawn map of Palestine in ink, crayon and ballpoint on graph paper loosely inserted. Contemporary giltstamped half cloth with a mounted reproduced drawing to lower board, showing an elegantly dressed group of people.

Private photo album composed by a British engineer stationed in El Qantara, Egypt, possibly a member of the Royal Engineers, who constructed a new railway from Qantara to Romani and eastward through the Sinai to El Arish and Rafa on the border of the Ottoman Empire in January 1916. During World War I, Kantara, as it was referred to by the Allied troops, was the site of Headquarters No. 3 Section, Canal Defences and Headquarters Eastern Force during the latter stages of the Defence of the Suez Canal Campaign and the Sinai Campaign of 1916. The massive distribution warehouse and hospital centre supported and supplied all British, Australian and New Zealand operations in the Sinai from 1916 until final demobilization in 1919.

Taken on trips to Palestine between 1916 and 1922, half of the photographs focus on railroad motifs, exhibiting railway bridges, including the bridge crossing the Suez Canal in El Qantara, train stations, and tracks under construction, as well as rather spectacular accidents with locomotives and waggons fallen over in the desert. One picture depicts a decorated train of British soldiers bearing the sign "Demob special goodbye" leaving after the Armistice. The other half mainly shows views of Jerusalem, including close-ups of landmarks such as the Tombs of the Kings and the interior of Ascension Church, as well as steam ships in the Suez Canal and a "Turkish Gun". Although not identified by name, the engineer can be seen posing in several photographs, sometimes wearing a British uniform. The manuscript map shows the railway line from Qantara to major cities including Jerusalem, Tel Aviv, Haifa, and Nazareth, at one point crossing into Syria and reaching Beirut.

Hinges broken; extremities slightly rubbed; crack on spine measuring ca. 5 cm. A few photos as well as the map with small marginal tears and creases. Bookplate of the British businessman and railroad enthusiast William Hepburn McAlpine (1936-2018), and stamp of ownership of Arthur Lord-Castle, who was associated with the Narrow Gauge Railway Society in 1956, to front pastedown. A unique survival. 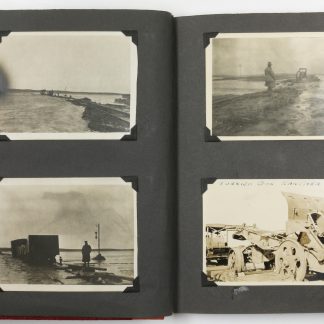