13th-century treatise on falconry, in the original Turkish with a German translation, with two other early falconry treatises

Frontispiece plus (8), XXXII, (2), 115, (3) pp.; 48 ff. 8vo. With a lithographic frontispiece line drawing of a stone-cut falcon; the Turkish title-page with the title in a double-ogive decoration with arabesques, a braided border, flowers and 3 falcons; the opening page of the Turkish text in a border and its title in a kufic inscription in an elaborately decorated panel; and a woodcut white-on-black Turkish inscription on the back of the main (German) title-page. Set in fraktur, Arabic and Greek types with incidental roman. The main Turkish text is bound at the end of the book, with the pages progressing from right to left like a normal Arabic book, so that the book can be opened from either side.With a modern index of ornithological, zoological and botanical names of animals and plants mentioned in the Turkish treatise, citing both the page and the chapter numbers, reproduced from manuscript. Later 19th-century half tanned sheepskin, sewn on 3 recessed cords (but with 5 false bands on the spine), title in gold in the 2nd of 6 spine compartments, marbled sides, endpapers printed in a Spanish-marbled style. With the publisher's original tinted lithographed wrappers bound in (printed in black with a blue tint-block), with a falcon on the front and back, the white silhouette of a falcon inside back and a white panel for an owner's name inside front. The modern index is separately bound in modern goatskin, marbled sides, designed to match the main volume.

First printing in any language of three important manuscripts on falcons and falconry: a 12th-century Turkish treatise on falconry by Mahmud Ibn Mehmed al-Bargini, "Baz nama" ("Falcon book"), in the original Turkish and in German translation; the Holy Roman Emperor Maximilian I's ca. 1515 (?) "Über die Falknerey" in the original German; and a shorter Greek treatise on hawking, "Hierakosophion" ("Hawking apprenticeship") in the original Greek and in German translation, a variant form of part of a 13th-century work by the Byzantine Emperor Michael VIII (1223-82). Little is known about the author of the Turkish treatise, but he came from Anatolia on the southeastern coast of what is now Turkey, where he apparently worked in service of the Bey of Mentese. He cites another work from 597 AH (1200/01 CE).

Hammer-Purgstall (1774-1856), a leading Austrian orientalist with an extensive knowledge of languages, took up a diplomatic position at the Austrian embassy in Constantinople in 1799 and remained in Turkey and the Middle East until 1807. He found the Turkish manuscript on falconry at the Biblioteca Ambrosiana in Milan in 1825 and the other two manuscripts at the Hofbibliothek in Vienna. He not only translated and edited the present texts but also contributed a 32-page introduction and a list of 63 works on the subject of falconry, from the 15th century to his own day. The book, printed in only 300 copies, has been largely overlooked in the literature on ornithology and Islamitica, but Schwerdt notes that it is "particularly important to lovers of falconry, its origin and history". It also provides insights into the Turkish language and Islamic culture. Although published in what is now Budapest, it was printed in Vienna. The printing office had its own typefoundry, stocked with matrices for various non-Latin types, giving the book a special typographic interest as well. The decoration on the Turkish title-page departs from Islamic tradition by incorporating pictorial images of three falcons. The book collates: frontispiece + [pi]4 a-b8 [c]1 [= 84] 1-78 84 (-84); 2[1]8 2-68 = 128 ff., with the second series of numbered quires (containing the Turkish text) progressing from right to left.

With some modern pencil notes on the flyleaf and in the margins. Somewhat foxed throughout, as usual, but otherwise in very good condition and nearly untrimmed, preserving many deckles and point holes and with most bolts in the main Turkish text unopened. The original publisher's illustrated wrappers, rarely preserved, show a few small chips, tears and scrapes but are still in good condition. The binding is chipped at the foot of the spine and slightly worn, but still generally good. First edition (in Turkish and German) of an important 13th-century Turkish treatise on falconry, with the publisher's illustrated wrappers bound in. 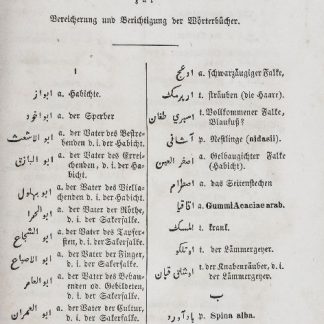