Suppressing the East African slave trade in the Gulf region

Colomb, Philip Howard. Slave-catching in the Indian Ocean. A record of naval experiences.

8vo. VIII, (4), 503, (1) pp. With 8 steel-engraved plates including the frontispiece (the 5 signed ones engraved by Pearson) and a folding map of the Indian Ocean, Red Sea and the Gulf, hand-coloured in outline (lithographed by Edward Weller). Red cloth.

First edition (only edition until a 1968 facsimile) of a very detailed and well-illustrated account of a British naval campaign to suppress the East African slave trade in the years 1868 to 1870, published only eight years after the end of the United States' Civil War and the abolition of slavery there. Slavery was not outlawed in the Ottoman Empire (which at the time of publication included Egypt and what is now Iraq) until 1882, and in Iran and most of the Gulf States not until the 20th century. The author, Captain Philip Howard Colomb (1831-99), was Commander of the HMS Dryad from 1868 to 1870 and led the campaign. He operated primarily in and around the Gulf, Oman and Zanzibar and captured seven slave ships during those two years. The illustrations show the Dryad and some of the slave ships, individual and group portraits of slaves encountered during the campaign, and views of ports where slave trading occurred. One of the group portraits was engraved after a photograph made by one of the Dryad's officers and other illustrations after drawings by other officers. The map ("The slave trading waters of the Indian Ocean") shows the Indian Ocean, Arabian Sea, Red Sea and the Gulf, including Madagascar and the other islands. The first chapter relates Colomb's voyage to Aden, where he took command of the Dryad, and the next two chapters provide extensive background information to place the account of the campaign in context. Colomb's account of his own campaign includes chapters on individual regions (Bombay, Muscat and Oman, the Gulf, Madagascar, Zanzibar, etc.) and on various topics (slaves on board ship, the slave market, etc.). Colomb was promoted to Admiral after his retirement from active duty. The book is sometimes mistakenly ascribed to his younger brother, John Charles Ready Colomb. 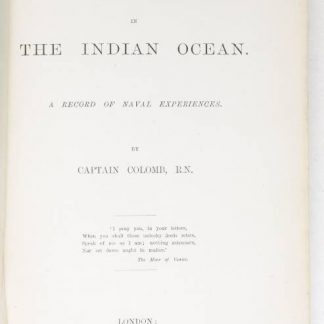 You're viewing: Colomb, Philip Howard. Slave-catching in the Indian Ocean. A record of naval experiences.London, 1873. € 4,500.00
Add to cart