8vo. (16), 220, (12) pp. With full-page woodcut illustration at the end of the preliminaries. Contemporary blindstamped calf over wooden boards with two clasps.

Exceptionally rare Arabic Psalter, the first of several reprintings of 'Abd Allah ibn al-Fadl al-Antaki's translation which had first appeared in Aleppo in 1706. Translated from the Greek Septuaginta Version, with the kathismata interspersed between the Psalms and with the Canticles following them. Edited, with a Paschalion for the years 1709-39 at the end, by Philipp Ghailán. 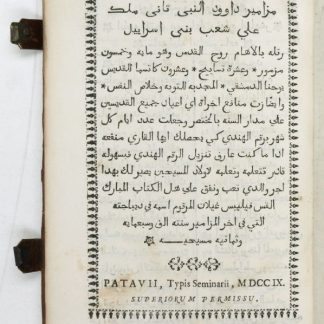