Ibn Batuta & Samuel Lee (editor). The Travels of Ibn Batuta. Translated from the abridged Arabic manuscript copies, preserved in the public library of Cambridge. With notes, illustrative of the history, geography, botany, antiquities, &c. occurring throughout the work. (Including:) Report of the proceedings of the first general meeting of the subscribers to the Oriental translation fund, with the prospectus, report of the committee and regulations.

Large 4to (32 x 26). "XVIII" [= XX], (2), 243, (1) pp. With various passages including the original Arabic text. Also with a subscription leaf for the Marquess of Lansdowne ("this copy was printed for the most noble the Marquess of Lansdowne"), printed in black and blue, with wood-engraved illustration, in a cast floral border printed in red. Later half calf. Top edge gilt.

The account, known as the Rihla, is esteemed for its lively descriptions of his travels, giving notable information on the history, geography and botany of the countries and cities Ibn Batuta visited. He describes, for example, the city of Aden as follows: "From this place I went to the city of Aden, which is situated on the sea-shore. This is a large city, but without either seed, water, or tree. They have, however, reservoirs, in which they collect the rain-water for drinking. Some rich merchants reside here: and vessels from India occasionally arrive here. The inhabitants are modest and religious" (p. 55). 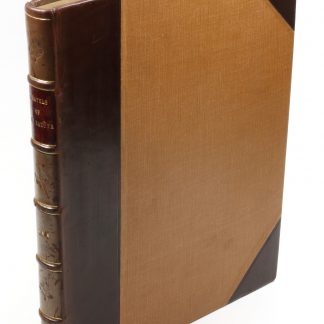