Bound after this is a 10-page German manuscript by a contemporary hand in red and black ink, entitled "Continuatio curiosorum experimentorum collocatio". Modern half vellum with marbled covers and spine title. Edges sprinkled in red.

Later edition of this oft-reprinted but rare manual of geomancy, a divination system with Arabian origins. The term is derived from the ancient Greek "geômanteía", a translation of the Arabic "'ilm al-raml" - the "science of the sand", or the art of foretelling from dots or lines randomly marked upon the ground or on paper. The method, probably developed in the Near and Middle East, arrived in mediaeval Europe via North Africa. In the European context it was seen as an ancillary science to astrology and was attributed to Hermes Trismegistus. It was especially Robert Fludd's "Utriusque cosmi maioris scilicet et minoris metaphysica, physica atque technica historia" (1618) that made geomancy popular in the late Renaissance. "Pointing, or geomancy, was among the most popular of the divinatory entertainments of the 17th and 18th century" (cf. Daxelmüller, Zauberpraktiken, p. 200, with fig. 35). Purportedly translated from Arabic, this manual cites Cornelius Agrippa, Henry de Pisis, Trithemius, and Fludd as its authorities.

The manuscript bound at the end of the volume treats of "Onomantia", or the so-called science of divining a person's future from their names - a method explicitly said to work not only with Christian names given at baptism, but also with any name bestowed by a similar process upon a Jew or Muslim.

Slightly browned, but well preserved. 1744 handwritten and stamped ownership of the Lieutenant Christoph Carl König on title page, with his initials and date at the head of the instructions to the reader. 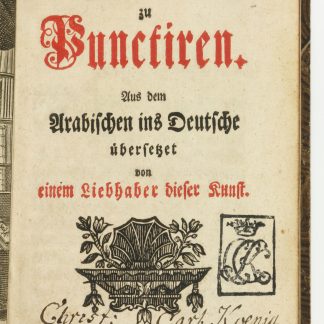