15 years in Constantinople: autobiographical manuscript of the French Ambassador to the Porte

Highly interesting autobiographical account of Guignard de Saint-Priest, a French politician and diplomat during the Ancien Régime and French Revolution, and of his diplomatic career. Appointed ambassador to the Ottoman Empire in 1768, he remained in Constantinople until 1785, with a single brief interruption in 1776/78, and there married Wilhelmina von Ludolf. Roughly half of the manuscript covers these decisive years spent at the Ottoman court of Mustafa III and Abdul Hamid I, offering a history of French relations with the Porte, biographies of previous French ambassadors and envoys to Turkey, and a history of French commerce and navigation in the Levant. In spite of his long mission, Guignard clearly was not happy with his posting, complaining of the "faibles et ignorance da la Porte Ottomane", yet he shows a keen eye for detail as well as for the Ottoman Empire's manoeuverings within the broader context of European power politics. His famous portrait of Marie-Antoinette is found in chapter XIX of the manuscript (p. 271-291). His account continues as far as the year 1802, also including his time at the Russian court of Paul I and the last years of Catherine the Great, as well as his stay in Denmark and Norway.

Born in Grenoble, Guignard joined the army at the age of 15. After his mission to Constantinople he became secretary to the Royal household of Louis XVI and Minister of the Interior in Necker’s second cabinet in 1789. Later, he apparently served Russia as a spy at the Swedish court before accompanying the exiled court of Louis XVIII to Blankenburg and Mittau.

The manuscript's editor, Comte Alexis de Saint-Priest (1805-51), was the grandson of François-Emmanuel. His father was François-Emmanuel’s second son Armand-Emmanuel-Charles de Saint-Priest (1782-1863), also a diplomat who later became Governor of Poldolia and Odessa in Russia. After his return to Paris, Alexis moved in literary circles, became a member of the Académie Française, and is mentioned in the preface of the original edition of the "Mémoires" (Calmann-Lévy, 1929) by the baron de Barante. Alexis de Saint-Priest entrusted the manuscript to Prosper de Barante as the basis of a biography published in 1845.

At the beginning of the 19th century this manuscript was still in the hands of a descendant of Barante's, who was responsible for the publication. The present mid-19th century manuscript was probably copied from the original fair copy, as it contains pencil corrections in a different hand throughout and corresponds with important variants in the printed edition.

A single page repaired with tape, a small tear to another page not affecting the text, otherwise a fine and clean copy, splendidly bound. 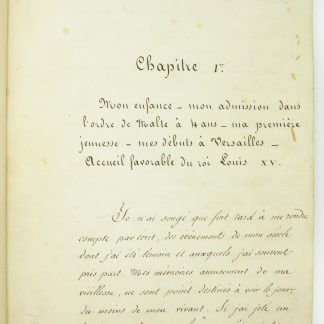