Early study of the Algerian rebel Abd el-Qadir, the Emir of Mascara (1807-83), published at the height of his insurrection against the French invaders. On 21 December 1847, after being denied refuge in Morocco because of French diplomatic and military pressure on its leaders, `Abd al-Qadir surrendered to General Louis de Lamoricière in exchange for the promise that he would be allowed to go to Alexandria or Acre. Two days later, his surrender was made official to the French Governor-General of Algeria, Henri d'Orléans, duc d'Aumale. The French government refused to honour Lamoricière's promise and `Abd Al-Qadir was exiled to France.

Some brownstaining to interior. Rare. 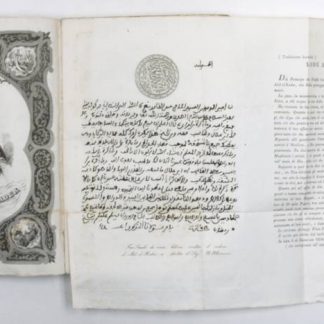