4to. 64 ff. With several diagrams and woodcut initials in the text and the printer's full-page woodcut device on the final page, printed in red and black. Near-contemporary limp vellum with 19th century spine label.

"Early edition of Alchabitius' 'Introduction to the Mystery of Judgments from the Stars', with the 'modern' version by Antonius de Fantis. Sessa issued the same work at the same time, but Liechtenstein's edition is superior and especially esteemed for the fine woodcut in black and red (printer's mark) at the end" (Weil). Translated by Joannes Hispalensis (in 1144), with the commentary of Joannes de Saxonia. "Although al-Qabisi's education was primarily in geometry and astronomy, his principal surviving treatise, 'Al-madkhal ila sina'at ahkam al-nujum' ('Introduction into the Art of Astrology') in five sections [...], is on astrology. The book, as the title indicates, is an introductory exposition of some of the fundamental principles of genethlialogy; its present usefulness lies primarily in its quotations from the Sassanian Andarzghar literature and from al-Kindi, the Indians, Ptolemy, Dorotheus of Sidon, Masha'allah, Hermes Trismegistus, and Valens. Although completely lacking in originality, it was highly valued as a textbook [... The] Latin version was commented on by Joannes de Saxonia at Paris in 1331" (DSB).

Some traces of worming throughout, mainly confined to margins and expertly repaired. 17th century ownership "Francois Claret" to title page. Rare; a single copy in auction records since 1975. 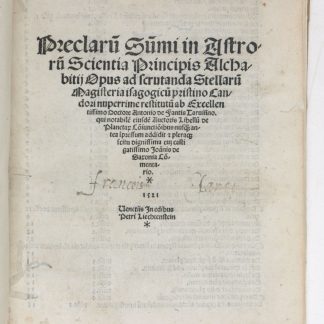