Third edition of Scaliger's famous recension of this instructional poem on astronomy written in the first century. "[Scaliger's] penetrating scholarship and powerful gift of analysis were magisterially demonstrated in his edition of one of the most difficult of Latin texts, the 'Astronomica' of Manilius, and this was a forerunner to his greatest work [namely 'De emendatione temporum']" (PMM, p. 59f.). The commentary (pp. 473-510, with letterpress Arabic) contains one of the earliest European studies of Arabic star names ("De quarundam stellarum arabicis appellationibus"). This edition was first published by Estienne in 1579; the first part of the present edition had already appeared in the previous year (cf. Adams M 364, Graesse IV, 364 & Houzeau/L. 1037). 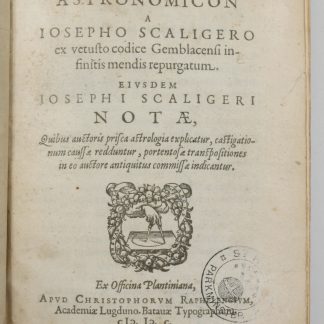