Each letter, in brown ink, occupies one page, with the last page containing the address and the sender's seal. The two inside pages of the second and third letter are blank. Each formerly folded for posting, so that the address would have appeared on one side and the seal on the other.

Three letters from Pedro Alvarez de Toledo (1484-1553), Duke of Alba and councillor to the Holy Roman Emperor Charles V, and his wife Maria Osorio y Pimentel (1498-1539) to Ferrante Gonzaga (1507-57), Viceroy of Sicily, who commanded the Imperial cavalry fighting the Ottomans in North Africa. They concern the Ottoman fleet marauding in the Mediterranean in 1539, thirteen years after the Ottoman victory at the Battle of Mohács gave them control of much of Hungary and roused Christian fears of their strong presence in Europe, and ten years after Barbarossa established his base in Algiers. The first letter, signed by Alvarez de Toledo, advises Gonzaga that, due to the recent loss of Castelnuovo to the Turks, he has given orders for vigilance and defensive preparations on the island of Lipari. He asks Gonzaga to supply any assistance the islanders require. The second letter, also from Alvarez de Toledo, advises Gonzaga that he has received a letter dated 30 August 1539 from Andrea Doria (1466-1560) in Brindisi, then Imperial admiral of the Holy League, urging a campaign against Barbary to be carried out forthwith, in order to avoid further damage from the Turks. This followed the defeat of Doria's fleet at the battle of Preveza in September 1538 by the fleet commanded by the Ottoman admiral Hayreddin Barbarossa (ca. 1478-1546), long feared in Europe as the infamous privateer Redbeard. The third letter is addressed to Gonzaga by Osorio y Pimentel, informing him that her husband has sent news that the Turkish fleet has been sighted off the Capo d'Otranto, some 150 sails having been observed. She also notes that she has informed Francisco de Tovar, governor of the port La Goleta at Tunis. Given that Barbarossa may direct his attention there, she requests that Gonzaga send a frigate to Tunis to warn de Tovar to remain vigilant.

The seal on Osorio y Pimentel's letter is damaged and can no longer be made out, but the faint visible traces appear to match the arms and flags of her husband's seal, and a small part of the imperial seal on his second letter is damaged, but all three letters are still in very good condition. Three letters of 1539 all important primary sources for hostilities between the Ottoman Empire and Christian Europe. 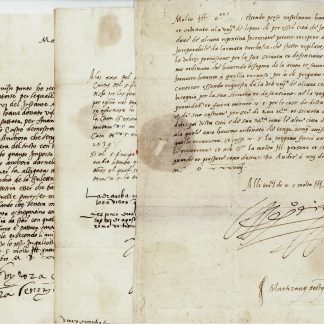