2 volumes. Folio. With 4 engraved plates, and 3 woodcut illustrations in the text. Each volume with an engraved headpiece, the first incorporating the coat of arms of Pope Clement XI, and the second that of Jean-Paul Bignon. Contemporary calf, richly gold-tooled spine and binding edges.

First edition, second issue, of a monumental collection of Greek voyages, often overlooked in the literature, including the first complete edition of Cosmas of Alexandria's celebrated "Christiana Topographia". Cosmas, a merchant from Alexandria, sailed in the Red Sea and the Arabian Gulf and visited Ethiopia ca. 530. Though he was known as "Indicopleustes", or Indian Voyager, it is doubtful whether he actually visited India. In his "Christiana Topographia" Cosmas aimed to show that the earth was flat and the cosmos shaped like rectangular vaulted box. Several of the engravings in the present volume, reproduced from a manuscript, illustrates this view. In one of them the earth is shown as a rectangle with three notches, one of them representing the Arabian Gulf, and the whole surrounded by a an ocean, with in the east another rectangle representing Paradise, out of which four rivers flow into the inhabited world. Slightly browned, with some occasional minor foxing or thumbing, and some faint stains, otherwise in very good condition. Binding also very good, only slightly rubbed and the spine of the second volume slightly damaged at the top. 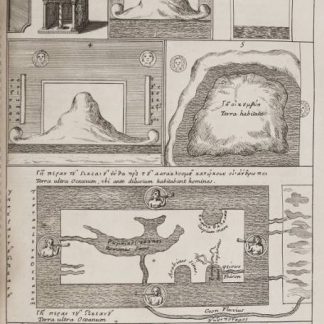