First edition, very rarely seen in trade or auction and only 4 copies recorded in the US according to OCLC.

"Cette biographie est un des livres classiques de la langue portugaise" (Brunet). Includes an account of the battles at Ormuz between the Turks and the Arabs. Dom João de Castro (1500-48) was a naval officer and later Viceroy of Portuguese India. In 1538 he embarked on his first voyage to India, arriving at Goa and immediately proceeding to the defense of Diu. Castro was responsible for the overthrow of Mahmud, King of Gujarat whose interests threatened Portuguese control of the Goan coast. His voyages frequently took him to the coasts of Arabia, and his present biography contains many details about the Peninsula, especially about Aden and the sea route to Mecca. Castro died in Goa in 1548 and was initially buried there, but his remains were later exhumed and transferred to Portugal. 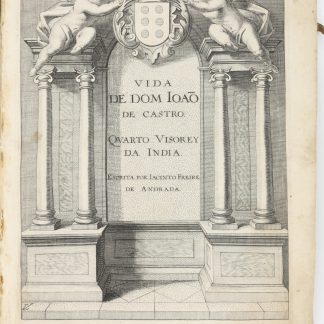