On the premiere of his Mass No. 1

To his friend Rodolf Weinwurm, the conductor of the Wiener Singakademie, about the premiere of his Mass No. 1 in D-minor in the Linz cathedral and the Redoutensaal, expressing his surprise that the latter was packed with listeners despite the seriousness of his composition, and mentioning that his concert was attended by Josef, Archduke of Austria - He intends to have a clean copy of the full score made, which he would like to send to the Weinwurm to deliver to the critic Eduard Hanslick and the composer and conductor Johann Herbeck, hoping the latter would agree to have it performed in the Vienna Musikverein, as a performance in the church would require too much rehearsal.

The mass, which was highly successful both among the critics and the audience, was a breakthrough for Bruckner as a composer. It was performed in Vienna on 10 February 1867, conducted by Johann Herbeck and with Bruckner playing the organ. 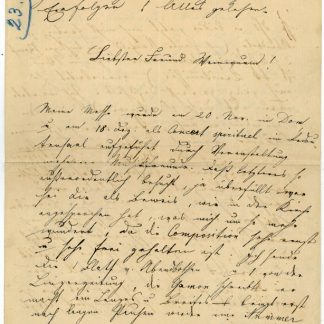