Including early biographies and works by Stalin

8vo. A total of 760 pages. All bound in contemporary quarter-leather binding with giltstamped spine title.

A collection of extremely rare and early Lenin pamphlets, including four early biographies and studies of Leninism, two of which are early works by Josef Stalin. Assembled and bound thus in the mid-1920s. Contains individually: 1) Popov, N[ikolay] N. / Yakovlev, Ya. A. Zhizn Lenina I leninizm [i.e. The Life of Lenin and Leninism]. Moscow: Krasnaya Nov, 1924. 104 pp. With 2 frontispieces. One of the first Lenin biographies written by N. Popov (1891-1938). A former menshevik, and from 1919 onwards a bolshevik, he held various positions in the party buerocracy. He was executed in 1938.

2) Lenin, I. Karl Marx. Kratkij bìograficeskij ocerk s izlozeniem marksizma [i.e. Karl Marx. The Short Biography with the Summary of Marxism]. Moscow: MKRKP, 1924. 39 pp. One of 3000 copies. Second edition of the book, the first of which had appeared in 1918.

3) Lenin, I. O prodovolstvennom naloge [i.e. On the Food Tax]. Rostov-On-Don, 1921. 39 pp. One of 10,000 copies. First edition. Very rare. In this brochure Lenin defends the necessity for a food tax in the midst of the Civil War, during the famine in Central Russia.

8) Lenin, I. O naturalnom naloge (doklad na X siezde RKP) [i.e. On Tax in Kind (the Message at 10th Meeting of RKP) and the Material for Discussion]. Rostov-On-Don, 1921. 32 pp. One of Lenin's seminal speeches at the 10th meeting of the Party. Brochures of the text were printed simultaneously in Gomel, Rostov, Moscow and Saratov. The speech was about the substitution of the "prodrazverstka" (the Red Army's practice of requisitioning food from the peasants, widespread during the Civil War) to a more civilized system of taxation.

9) Lenin, V. Proletarskaia revoliutsiia i renegat Kautskii. Izdanie tsentrispolkoma [i.e. The Proletarian Revolution and the Renegade Kautsky]. Moscow, Kommunist, 1918. 135, (1) pp. First edition of one of Lenin's most famous books of the period: a reply to Kautsky's attack on him. Kautsky was banished from Russia in 1918, whereupon the theoreticians and practitioners of Marxism had split. Extremely rare. 10) Stalin, I. O Lenine i leninizme [i.e. On Lenin and Leninism]. 2nd edition. Moscow: GIZ, [1924]. 92, [4] pp. The second edition of Stalin's classic work on Lenin. Created immediately after Lenin's death, it went through several dozen editions during the next decades.

Some dampstaining to the portrait frontispieces; occasional pencil markings. A few edge defects to the final leaves of item 1 and the first leaves of item 7, which surround the 12mo brochures 2-6. Extremeties somewhat bumped in places. 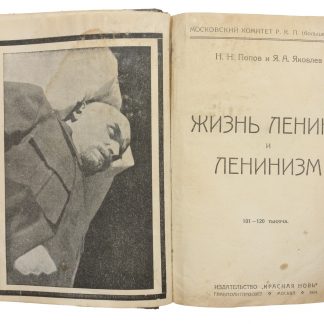