First edition. Inscribed not quite a year after the volume's publication to César de Paepe, the leader of the International Workingmen's Association (the First International) in Belgium: "Au citoyen Cézar de Paepe / salut fraternel / Karl Marx / Londres 3 Septembre 1868". Curiously, Marx had first written "avec les compliments de Karl Marx" before thinking better of such a comparatively bland dedication and erasing the just-penned words. As it had not yet settled and oxidized, the wiped-out iron gall ink must have appeared much fainter at the time of inscribing, and Marx wrote across the then slightly smudged area (which today appears considerably darkened) his much more cordial "brotherly greeting".

Indeed, Marx had good reason in early September 1868 thus to draw De Paepe to himself, assuring him of their fraternal affinity: three days later, on 6 September, the Brussels Congress of the First International was to begin, where the conflict with the French Proudhonists would come to a head. Marx did not attend, but nevertheless succeeded in pulling the strings from London. With De Paepe the principal leader of the Collectivist faction favoured by himself, Marx managed completely to sideline Proudhon's adherents and made the delegates accept several contentious resolutions confirming the advantages of collective, socialist ownership of the means of production and of land. Extracts from the machinery chapter of "Das Kapital" were read at the Congress (it is not too far-fetched to imagine it may have been from this very volume), and these quotations provided the theoretical basis for the resolution condemning the extortionist use of machinery by the capitalist class. Notably, the General Council also passed a resolution recommending that working men in all countries study Marx's "Kapital".

Educated as a physician in Brussels, the Belgian César de Paepe (1841-90) is considered, with Michail Bakunin, the co-founder of collectivist anarchism, the theory of which they formulated independently of each other in 1866. While De Paepe was an early disciple of Proudhon, he would often gravitate toward Marx's positions, and he was counted second only to Marx as a theoretician of the IWMA. In 1885 he was among the founders of the Belgian Socialist Party, though his attempts to reconcile anarchists and Marxists ultimately isolated him within the Socialist movement. Long a champion of universal suffrage in Belgium, he died of consumption, aged 49, only three years before it was in fact introduced.

Hailed as one of "the most influential pieces of writing in world history" (International Institute of Social History in Amsterdam), "Das Kapital" was the culmination of Marx's many years' work in the British Museum. This first volume was the only one published during Marx's lifetime, the later volumes, edited by Engels from the author's manuscript, appearing in 1885 and 1894. Marx's own annotated copy, along with the only surviving handwritten page of the Communist Manifesto, were inscribed on the prestigious UNESCO "Memory of the World Register" in 2013.

Inscribed copies of the first edition of "Das Kapital" are of legendary rarity: only two copies are known in institutional possession (Trinity College, Cambridge; Harry Ransom Center, Texas; the copy at Darwin House, Downe, inscribed to Charles Darwin, is the 1873 second edition). To these, research could add no more than three others, all of which surfaced in the trade within the last four decades. The present copy, hitherto unrecorded, was acquired directly from the estate of the Frankfurt lawyer Wilhelm A. Schaaf (1929-2015), a specialist in economic, commercial and insolvency law, in whose collection it rested for the last forty years.

A correction, presumably by Marx himself, is on page XII of the Preface, where "transatlantischen Oceans" has "trans" crossed through in pencil. Light toning throughout, with the odd brownstain near the beginning, a tiny tear to the top edge of p. 353f., but generally very well preserved. 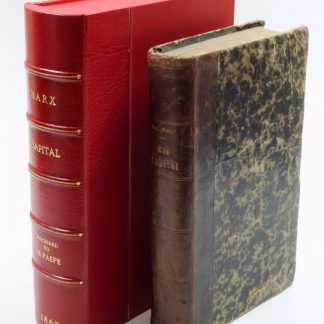