Very rare first edition of Marx's famous text, directed against Pierre Joseph Proudhon and the utopian socialists, which led to a long and bitter feud between the authoritarian and the libertarian-anarchist wing. The half title bears Marx's autograph inscription to Anna Vivanti, née Lindau: "Madame Vivanti / Hommage de l'auteur. / Londres, 2 Marx 1872" (the final digit is slightly trimmed by the binder). Anna Vivanti (1828-80), a sister of the well-known German critic, writer and democrat Paul Lindau, had in 1853 married the wealthy silk merchant Anselmo Vivanti, an Italian revolutionary exiled in Britain. The families had known each other for a while: on Christmas Eve 1868 Jenny Marx had described Madame Vivanti in a letter to her sister Laura as "a strange little lady, ugly, deformed, but full of life and spirits [...] She is married to an Italian and is an ardent admirer of Dante, whose poetry she knows by heart. She reminded me so much of the woman Balzac depicts in his Recherche de l'Absolu" (Moscow Russian State Archive for Social and Political History, fond 7, opis 1, delo 11/3). In March 1870 Marx's daughter Jenny had been invited to Norwood to attend a function given by Madame Vivanti, and the 25-year old had a great success with a Shakespearean recitation; later that same year, in October, Anselmo, Anna and their little daughter Luisa had stayed with the Marxes in Hampstead. In 1872 Anna repeatedly tried to solicit from Marx articles for her brother's journal "Die Gegenwart". On 21 March 1872 she thanked Marx for his gift of the book: "[...] I would like to write you a few words about this exceptional book 'Misère de la Philosophie', which I am not a little proud to own, but I have a dreadful cold which makes my head heavy and dumb; also, I would fear to monopolize your valuable time with my silly writing [...]" (translated from German, IISG, D VIII 40 [12073]).

Bound first is the first independent printing of Marx's "The Eighteenth Brumaire of Louis Napoleon", originally published in the May 1852 issue of "Die Revolution". That both works were thus bound together for Anna Vivanti is evident from the binder's pencilled instructions on the final page of the "Misère": "Vivanti / ½ pelle". After Anna's death in 1880 the volume must have ended up in Milan with her widower Anselmo, who died there in 1890 soon after returning to his native country (previously, the widely admired hero of the Risorgimento had long served as President of the New York Chamber of Commerce). Four years later, the philosopher and socialist Antonio Labriola (1843-1904), one of the first propagandists of Marxism in Italy, acquired the volume for 25 lire at a Milan auction, as he reported to Engels in a letter of 3 August 1894: "Ho qui un volume legato, comprato a Milano auzione £25. Contiene oltre al 18 Brumaio, Misère d. l. Ph. originale, esemplare con dedica di Marx a Madame Vivanti (?) 2 (o 4) marzo 1873 (o 72, non chiaro)". It is this letter that led the editors of the Marx-Engels Gesamtausgabe falsely to assume that it was a copy of the "Eighteenth Brumaire" which Marx had inscribed to Madame Vivanti (cf. MEGA I, 11, p. 705).

Corners slightly bumped, but very finely preserved altogether. Both works somewhat browned, the first work more so, with some brownstaining to the title page and traces of an erased ownership stamp (possibly that of Labriola or a previous owner?). Contemporary pencil underlinings in the "Misère", perhaps reading notes by Anna Vivanti. One of the few copies of a Marx work known to have been inscribed by the author to a woman; among other female recipients of inscriptions by Marx are Luise Weydemeyer and Caroline Schoeler ("Das Kapital") as well as Natalja Utina (also the "Misère", with the author's corrections). 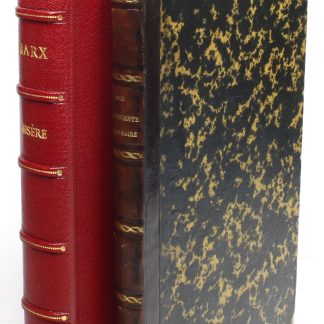