Folio (209 x 318 mm). 459, (2), 14 (but: 13) ff. of index, numerous errors in Arabic pagination, but complete according to catchwords, numbered throughout by a later owner in pencil from left to right, 1-474 ff. Ottoman Turkish manuscript on thin, polished, cream-coloured laid paper. Text is in fine naskh script with black and red ink within a red double-lined border, 31 lines of text within a written area of 232 x 112 mm. Occasional red underlining, sections usually demarcated by a single word of red text on a line with a red border on either side. With 11 full-page colour illustrations of scientific diagrams, 2 full-page coloured world maps, 8 full-page coloured tables, 2 full-page illustrations of Mekka and Jerusalem, 4 coloured half-page diagrams and 1 coloured half-page table, as well as a round, black and red ink diagram on leaf 448v. Contemporary full calf, expertly rebacked with six compartments of raised bands and gilt motifs, gilt red title label, all edges speckled red.

A fine 18th century manuscript copy of the famous scholarly encyclopedia, not printed until 1835 (in Bulaq). The "Marifetname", or "Book of Gnosis" is a compilation of astronomical, astrological, mathematical, anatomical, psychological, philosophical as well as mystical religious texts. It is famous for containing the first treatment of post-Copernican astronomy by a Muslim scholar.

Ibrahim Haqqi Erzurumi (1703-80) is considered an outstanding figure of 18th century Ottoman Turkey. Based on an immense knowledge of the Sufi branch of Islam as well as his studies in Western science, he devoted himself to the domains of both religion and science, considering both a means of approaching God.

Occasional smudging of ink; minor offsetting on pages facing illustrations, leaves 7-11 with minor waterstains in the upper corner margins, leaves 12-18 expertly reinforced in the upper margin, with rather severe loss to text in upper half of leaves 14v and 15. Text appears to be lost on 378r (faint traces of text still remain). Leaves 343v-350v have dark pink stain in centre of text toward gutter (no loss), likewise on 443v-463v. Leaves 448-454 have had their margins reinforced. Leaves numbered 449 and 450 must be switched, as well as 453 and 454. Altogether a very appealing copy with the numerous illustrations showing fine detail. 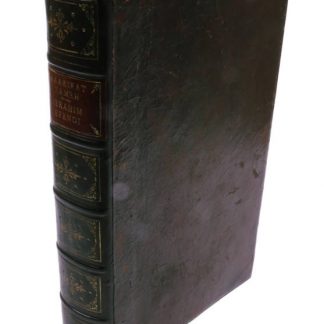