Extremely rare: this pirated edition constitutes the first American-produced independent printing of the first volume of "Das Kapital", published in four successive issues of "The Humboldt Library of Science" (based at 19 Astor Place, New York), Double Numbers 135-138 (second issue: a set of nos. 135-138 in the Karl Marx Memorial Library Luxembourg is dated from September 1 to October 15, 1890). Follows the legitimate first American edition produced in 1889 by Appleton & Co. in New York (a re-issue of the 1887 London edition), from sheets supplied by Swan Sonnenschein & Co. in London with a new title page only.

Closely printed, the work here comprises no more than 506 pages, followed by the list of the works and authors quoted. Each of the four parts has four leaves of publisher's ads at the end.

Text very slightly browned but mostly clean and well-preserved. Spines somewhat brittle and flaky; first volume reinforced at the spine; occasional edge chipping. No copy in the British Library; the only known copies are in the Library of Congress, in Moscow, and in Berlin (now likely in the Foundation Archives of Parties and Mass Organisations of the GDR in the Federal Archives [SAPMO]). 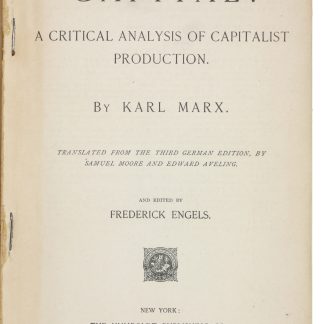