The first American edition (second issue): a stereotyped re-issue by Appleton, with new title page, of the 1887 first English edition, translated from the 1883 third German edition by Samuel Moore and Marx's son-in-law, Edward Aveling, with new editorial revisions by Engels. The posthumous second (1885) and third volume (1894) of "Das Kapital" would not appear in English until Kerr's 1906-1909 edition.

Cloth shows slight chafing to extremeties; a few pages buckled at fore-edge. Ownership of the contemporary American woodworker and labour activist John Shpis from Denver, Colorado, stamped above Editor's Preface and at the end of the text. 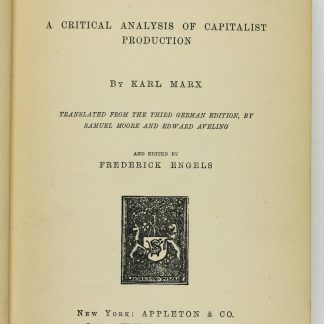