First edition of Heidegger's inaugural lecture, presentation copy in a master binding. Inscribed to the singer Walburga Hedwig Elisabeth Gaehtgens (1915-2002) on the half-title: "Frau Walburga / zur Erinnerung / (24. Juli 1929) / Martin Heidegger". The date is that of the lecture. Gaehtgens married the classicist Ernst Zinn (1910-90) in 1938. Zinn's own ownership, dated 1929, is pencilled into the upper right corner of the half-title. He also added a note on the on the inside wrapper cover: "Binding: Eva Aschoff, Freiburg im Breisgau, 1929". Thus, Zinn acquired the copy in 1929, and it was likely signed by Heidegger in or after 1938. Heidegger and Zinn knew each other since 1929 and kept in contact until the philosopher's death in 1976.

The binding, commissioned by Zinn, is a work by the artist and master bookbinder Eva Aschoff (1900-69), decorated with blue and black circles, lines, and coloured spaces. An additional note by Zinn, dated 1961, is added in blue ink at the lower edge of the half-title. 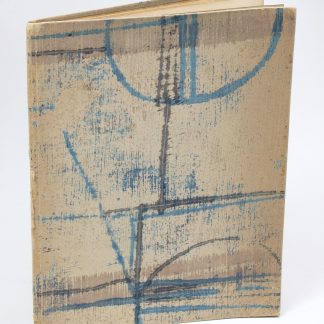