Fundamental for any study of French music in the 18th century

First octavo edition, a reprint of the original quarto edition which appeared the same year.

"In 1756 Rousseau moved into 'L'Ermitage', the cabin on the edge of the forest of Montmorency, the use of which had been given him by his benefactor Madame d'Epinay. Here he not only occupied himself with important literary and philosophical enterprises, but also resumed his work on the various articles on music which he had written in all too short a space for Diderot's and d'Alembert's Encyclopédie, revising them entirely, with many improvements to the form, but especially to the contents, so as to incorporate them into his own 'Dictionnaire de musique'. This work, fundamental for any study of French music in the 18th century, was published in Paris in 1768" (cf. MGG XI, 1008). An English translation by William Waring appeared in 1771.

The great philosopher of the Enlightenment was also a composer of note: "his views on music had a strong impact throughout Western civilization", and "two of his poetic-musical creations proved epochal" (New Grove XVI, 270). 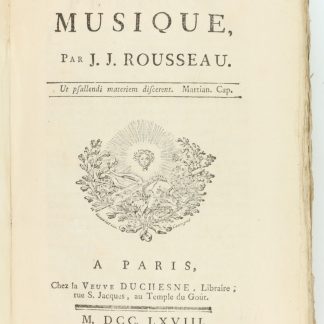