The Women of Leipzig Pay Homage to Bismarck

Full-page painting in colours and gilt on vellum, signed by Julia Schily-Koppers, and 7 paper leaves with coloured borders by Amalie Rost (one signed) around the signatures of the dedicatees. Stored in a full leather portfolio over wooden boards (412 x 574 mm) crafted by Amalie Sarling (signed): upper cover with leather carving and 4 tooled brass corner fittings with glass bosses; green moirée silk pastedowns and gilt inner dentelles to both covers.

Homage album for Otto von Bismarck (1815-98), who had been forced to resign as chancellor of the German Empire five years previously, on the occasion of his 80th birthday - a time at which the aged statesman was fighting to shape his image for posterity. After a vote to send him a congratulatory birthday telegram had fallen through in the Reichstag, where Bismarck enjoyed little support, some 400 German cities immediately declared him an honorary citizen - a prelude to the Bismarck mania that would seize Germany after his death three years later. The fine painting on vellum by the Westfalian artist Julia Schily-Koppers (1855-1944) depicts a young woman with four children before a bust of Bismark, the pedestal inscribed, "From the German women to the greatest German man", with the statue of Germania in the background.

Koppers, a native of Borken near the Dutch border and grandmother of the German politician Otto Schily, had studied at the Düsseldorf Academy and enjoyed an excellent reputation. The borders of the signatory sheets were painted by the Leipzig architectural painter Amalie Rost (1845-1920). They enclose more than 250 signatures by women of Leipzig, including both artists and the bookbinder. 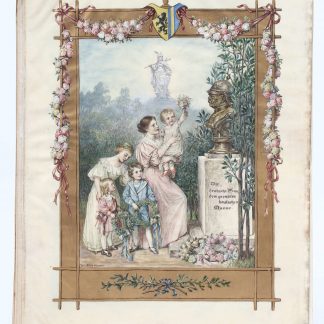