[Pharmacology]. A collection of 82 wooden boards carved on both sides with 820 "labels", five to each side, for herbal remedies used by a dispensing pharmacologist.

Using imperial measures - metric was not used until after the Revolution of 1911 - these receipts are headed with either the title Chung the Celestial at Chuan-Tuan, or Military General the Protector of the People at Chu-Ling-Shan. There are 'labels' for men, women and children, giving the ingredients and name of the remedy pills, potions or powders to "restore youth" and similar purposes. Chinese medicine is of great antiquity and devoid of any outside influence. Legend has it that the Yellow Emperor, Huang Ti, wrote the first treatise on Chinese medicine in 300 BC. In its present form, the Nei Ching, on which most Chinese medical literature is founded, it is thought to date from the third century AD. The Nei Ching holds that "the blood current flows continously in a circle and never stops", anticipating Harvey by centuries. The Chinese materia medica has always been extensive and consists of vegetable, animal, including human, and mineral remedies. There were famous herbals from ancient times, but these ca. 1000 were collected by Li Shih-Chen in the Pen-ts'ao Kang-mu or Great Pharmacopoeia of the 16th Century. It was revised and reprinted many times in 52 volumes and is still authorative. The use of drugs is to restore the harmony of the Ying and Yang, related to the five organs, five planets, and five colours. Western influences did not occur until the 19th century, but today, with the revival of Taoist temples for healing which began to be tolerated again in the 1970s, and the profusion Chinese chemists, acupuncturists and hydrotherapists in the west, the Chinese can be said to have redressed the balance. The troubled history of the 20th century in China has made the survival of such ephemeral documents, and in such quantity, quite remarkable. 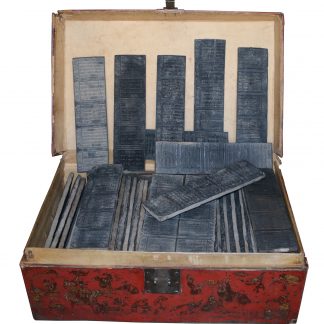