Heated dispute between a Spanish pharmacist and the College of apothecaries

Small 4to (200 x 150 mm). (25) ff. With the woodcut arms of Philip III of Spain on title-page. Loosely inserted in contemporary limp sheepskin parchment.

Very rare first and only edition of a "memorial" addressed to the king, Philip III of Spain. Cosme Novella was initially denied permission to practice the profession of pharmacist in the apothecary of his father-in-law who had recently passed away. During the inspections by the "Colegio de Boticarios" (College of apothecaries) they had found deficiencies in the operation of the apothecary, but Novella was finally admitted after intervention of a municipal jury. In 1601 he was appointed as inspector to the pharmacy of the Hospital Real y General, where he found serious deficiencies in their preparations of medicines. This angered the management of the hospital, who held a high position in the College of apothecaries. The College restarted their inspections of Novella's business and closed his store. The dispute then grew to a bigger scale, involving the royal chapter of pharmacists and physicians. In the present "memorial" Novella presents his case to the King. Ultimately, the royal decree would be in favour of Novella, and his pharmacy would be permitted to re-open.

With manuscript note on title-page. Some faint waterstains, two tiny tears in the fore-edge margins and the paste-downs detached from the boards, separating the bookblock from its binding. A good copy. 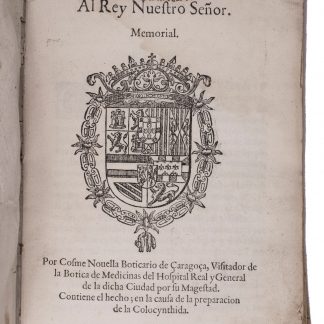