The birth of modern anatomy: a coloured copy of the first edition, used by the surgeon of the Duke of Saxony

A truly outstanding copy of one of the greatest and most appealing books in the history of science. Preserved in its original binding with the blindstamped initials of its first owner, the German physician Caspar Neefe (1514-79), and with his handwritten annotations throughout, the present copy is partly coloured by a contemporary artist (including the iconic woodcut used as title-page and all anatomical illustrations up to page 165). Caspar Neefe, who later served as personal physician to Duke Albert I of Saxony, acquired the precious volume only a year after its publication and obviously consulted it extensively throughout his career as a medical practitioner.

With the publication of "De humani corporis fabrica" (when he was only twenty-eight) Vesalius revolutionized both the science of anatomy and how it was taught. In his preface he describes his disappointing experiences as a student in Paris and Louvain, stating his intention to reform the teaching of anatomy by giving in this book a complete description of the structure of the human body, thereby drawing attention "to the falsity of Galen’s pronouncements". Vesalius also broke with tradition by performing dissections himself instead of leaving this task to assistants: the striking and dramatic title illustration shows him conducting such a dissection, his hand plunged into a female cadaver (striking in itself, as only the cadavers of executed criminals could be dissected legally and female criminals were rarely executed), surrounded by a seething mass of students.

The "Fabrica" is also revolutionary for "its unprecedented blending of scientific exposition, art and typography" (Norman). The woodcuts by artists of the school of Titian are both iconographically and artistically important. The series of fourteen muscle men show landscapes that, when assembled in reverse order, form a panorama of the Euganean Hills near Padua, a scenery well known to Vesalius while he was at work on the Fabrica.

Of the few copies of the first edition to have come to the market in recent decades, only two were in a contemporary binding. Apart from Vesalius's dedication copy to Emperor Charles V (Christie's New York, 18 March 1998, lot 213: $1,652,500), only a single other partly coloured copy was previously known, a list to which ours must now be added as the third known copy in contemporary colour.

Acquired in 2017; previously in a Tyrolean private medical collection, where the book rested for three generations (erased circular library stamp in the blank lower margin of the title-page). An outstanding copy hitherto unknown to scholarship (cf. the recent census published by Dániel Margócsy, University of Cambridge, below; further relevant correpondence with Dr Margócsy is available upon request). Occasional waterstaining to margins, the splendid binding a little rubbed and bumped, but altogether a wonderfully crisp, wide-margined copy of the first edition. Unquestionably the most desirable copy of a milestone in the history of science still in private hands, and likely the most important medical book obtainable for decades to come. 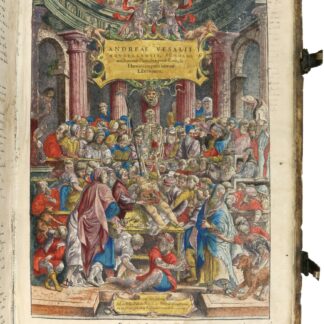