Suicide and women’s oppression in modern societies: a unique, early essay by Marx

Moses Hess' "Gesellschaftsspiegel" was an influential journal of pre-revolutionary social criticism, counting among its authors Karl Marx and (as a more occasional contributor) Friedrich Engels, as well as Rudolf Matthäi, Hermann Püttmann, Heinrich Bürgers, Friedrich Schnake and Georg Weerth. The present volume, comprising the latter six of the total of twelve issues that appeared, contains what scholars have considered perhaps Marx's most singular publication: an article entitled "Peuchet: vom Selbstmord" (in issue VII, pp. 14-26). Compiled from translated excerpts from Jacques Peuchet’s "Du Suicide et de ses Causes", a chapter from the author's memoirs, this long-neglected Marx piece constitutes "a precious contribution to a richer understanding of the evils of modern bourgeois society, of the suffering that its patriarchal family structure inflicts on women, and of the broad and universal scope of socialism" (Michael Löwy, Unusual Marx, in: Monthly Review 53:10 [2002]). It was Marx's habit to compile such excerpts from other authors in his notebooks, but this is the only example of such a collection being published by himself, during his own lifetime. Curiously, as Löwy has pointed out, the author chosen is neither an economist, nor a historian, nor a philosopher, not even a socialist, but none other than a former head of the French police archives under the Restoration! Also, the excerpted work is not a scientific one, but a loose collection of 'life incidents', anecdotes, and small stories, followed by some comments. Nor does the subject matter of the article belong to what is usually considered the political or economic spheres, but has to do with private life, specifically suicide; the main social issue discussed in this connection is women’s oppression in modern societies. "Each one of these traits is unusual in Marx's bibliography, but in combination, they make this piece unique [...] Marx left his imprint on the text in several ways: by his introduction, by the comments with which he peppered the piece, by his selection of the excerpts, and by the modifications introduced through the translations. And the main reason why the piece can be considered as expressing Marx’s own views is that he introduced no distinction whatsoever between his own comments and the excerpts from Peuchet, so that the whole document appears as a homogeneous piece of writing, signed by Karl Marx" (Löwy).

Occasional insignificant edge flaws or remarginings (without loss to text); binding somewhat bumped at extremeties, but in all a fine survival. 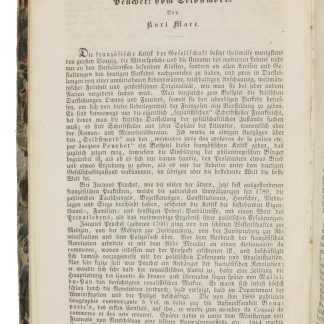