First Danish translation, second impression, of Marx's and Engels's revolutionary work of communist propaganda, "undoubtedly the most widespread, the most international production of all Socialist literature, the common platform acknowledged by millions of working men from Siberia to California" (preface to the 1888 edition). Constituting the first collected edition, the present publication is traditionally regarded as the first published Danish translation (the first issue was presumably published the previous year in instalments). While the title page states "1885", the volume could very well have been published before the end of 1884 (cf. Andréas, p. 113). At the 1884 Danish general election the Social Democratic Party gained its first two members of parliament, a pivotal event in a process in which many workers became politically active. This suggests a conscious stance of the class struggle which resulted in many workers joining the unions and the Social Democratic Party. The general sentiment was that only a comprehensive and unified workforce on the labour market could create the needed material progress. Realizing this, a need for theoretical insight with knowledge of the socialist principles rose, culminating in the party's proclamation: "Everything important in the socialist literature should be translated and published!" The first consequence of this was the Danish translation of "The Communist Manifesto", and later the translation of "The Capital".

"Admitted by every serious student of society to be one of the outstanding political documents of all time, the "Manifesto of the Communist Party" outlined the main positions of Marxism as a theory of history, a criticism of Socialist doctrine and a programme of revolutionary Action" (PMM). The "Manifesto" was first published in London in German in 1848 by commission of the second congress of the Communist League, which consisted mainly of exiled Germans living in London. "The revolutionary upsurge in Europe owed nothing to the 'Manifesto'; but the panic-stricken authorities found its subversive sentiments a good excuse for action against its authors. Marx and his wife were arrested and expelled from Belgium. Later the Neue Rheinische Zeitung, Marx's principal organ of expression, was suppressed in Cologne, the final issue being defiantly printed in red, and Marx himself was expelled in turn from Germany and France. He then emigrated to England, where he spent the rest of his life - much of it in the reading room of the British Museum" (PMM). Although the preface of the first edition of the Communist Manifesto states that it had been translated into several different languages (English, French, Italian, Dutch, Danish), all of which should have appeared that same year, not a single copy of any of these alleged translations has ever emerged, and it is evident that - although some of them were prepared as early as 1848 - they only came out years later (the first of them being the English one, in 1850).

Some wear to the binding's extremities, otherwise a fine and clean copy. 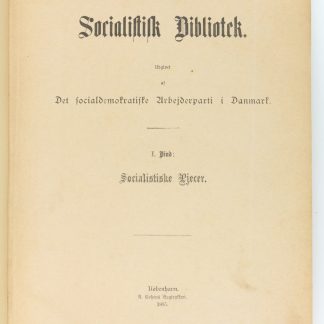